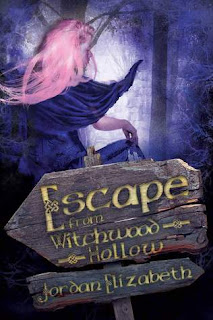 This is a YA paranormal novel. Honoria is a fifteen year old girl who lost her parents in the attack on the World Trade Center and subsequently moves from New York City with her brother, aunt and uncle to a small town in rural New York. This particular small town has a legend that says the surrounding woods are haunted by a witch and once you enter them you cannot leave. Several people have gone missing over the years, especially children. Their disappearances are attributed to the witch in the woods.

Honoria is a good kid, and tries hard to keep her life together despite her incredible grief, but she has trouble making friends in this new place.

Then she meets Leon and they share an interest in the history of the town and the legend, but Leon's girlfriend doesn't like this. In the meantime, Honoria's loss competes with her fixation of the legend of the witch who haunts the woods.

But Honoria's story is not the only one told in this book. The author also chronicles the lives of two other young women who have been ensnared by the legend of the woods in two other centuries. And this is part of what intrigued me by this story. While the present day (well at least in 2001) is the main body of the book, it is intermingled with those who went before to make a more complete tale.

I read other reviews which complained about the frequent references to clothing brands/styles, but that didn't detract for me. I saw them as relevant in two ways. First, as a way to show what a fish out of water Honoria is in a place so different to the life she was used to, and second because Honoria wanted to design a fashion magazine, which means she is very aware of clothing styles/designers.

I thought I knew where the author was going, but she surprised me which is often a good thing and definitely one in this case. The ending came up fast and was unexpected, but after pondering on it for awhile I've decided it makes perfect sense and fits the story well and I can think of no better way to end it. I really enjoyed this book.

This story pulled me in the with different timelines and the missing children. What elements are guaranteed to make you want to read it? Please tell me in the comments.

Book Blurb:
Everyone in Arnn - a small farming town with more legends than residents - knows the story of Witchwood Hollow: if you venture into the whispering forest, the witch will trap your soul among the shadowed trees.

After losing her parents in a horrific terrorist attack on the Twin Towers, fifteen-year-old Honoria and her older brother escape New York City to Arnn. In the lure of that perpetual darkness, Honoria finds hope, when she should be afraid.

Perhaps the witch can reunite her with her lost parents. Awakening the witch, however, brings more than salvation from mourning, for Honoria discovers a past of missing children and broken promises.

To save the citizens of Arnn from becoming the witch’s next victims, she must find the truth behind the woman’s madness.

How deep into Witchwood Hollow does Honoria dare venture? 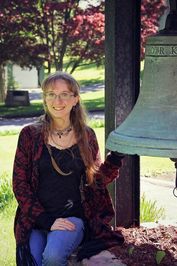 Jordan Elizabeth, formally Jordan Elizabeth Mierek, writes down her nightmares in order to live her dreams. With an eclectic job history of working as a college professor; historic costumed interpreter at Fort Stanwix, Victorian Leisure Fair, and Mayfaire on the Green; office specialist; sales clerk; election inspector; and trainer, she is now diving into the world of author.It happens to be her favorite one.

When she’s not creating art or searching for lost history in the woods, she’s updating her blog, Kissed by Literature. Jordan is the president of the Utica Writers Club and maintains JordanElizabethMierek.com.

She roams Central New York, but she loves to travel. A great deal of time has been spent in a rural town very similar to Arnn, the setting of her novel ESCAPE FROM WITCHWOOD HOLLOW.
Posted by A.B. Shepherd at 2:20 PM