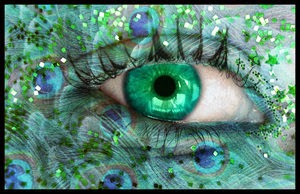 Mother has been seen the signs for years now. The signs that the time has come again.
She calls to her the children of her tribe.

"It is time for the ceremony. Gather all to the sacred circle."

They run off in all directions. She tips her head to the sky, closing her eyes and enjoying the wind caressing her face. Soon all this will change.

They come to her, young, old and in between. Surrounding her. She rests in the center of the sacred circle. Once all are in place she lifts her hands to the heavens and the ceremony begins. The didgeridoo sounds deep and reverberates through her chest. It is joined by the voices of her people in song. She feels the power surging through her body, tingling from her toes to her fingertips.

The sacred song nears its crescendo and Mother rises to her feet. The wind begins to whip, gusts rising. As the song trails away with the tempest, she signals the tribe to take cover in the prepared cave and seal the entrance. They run for cover, struggling against the galeforce blowing against them.

It pains her, this ceremony. She's done it before and likely will do it again. And again. Until man gets it right. She thinks of the lost civilizations on other continents. The Incas and Mayans. The Atlantians. The Romans. Those from Pompei.

So many times she's had to repeat this cycle. Tears streak down her lined and weathered face as the thunder and lightning crash around her. She lifts her ancient hands higher, bringing more power to the storms. The oceans rise and the ground shakes. Mountains fall, volcanoes erupt. She stands taller, stronger. Her role is no easy one. It takes great strength of will.

Her compassion brings sorrow, and her tears form rivers. The storms, quakes and tsunamis destroy cities, homes, and people all around the world. There will be survivors. Enough to start anew. Yet most will die.

Her heart throbs with the pain of it, yet it must be done. Each time Serpent Mother destroys the world she hopes this time will be different. This time greed, power struggles, war and polution won't win. This time the people of Earth will learn to live together, in peace, in love.

The Earth is battered for days and she is poised in the middle of it all. Finally, when most of the world has been destroyed she lowers her aching arms and her worn shoulders slump. Her head drops forward on her neck, and her wet eyes dry. She is spent and her heart feels as torn and battered as the Earth on which she stands. Again.

She falls to the ground, on her knees. She whispers her apologies to the Earth, to the survivors even though they can't hear. Mother sheds her human skin, reverting to her snake-like serpent form.

Soon she will slither away into the bush, and the survivors will start anew.

Do you like this story? Hate it? Think it is just meh? Leave a comment and tell me what you think. Your feedback means a lot to me.

*This story is intended as a respectful homage to the Aboriginal People of Australia. Research was done, but this story is a product of my own imagination based on my (scant) knowledge of Aboriginal culture. It is not intended to portray an accurate depiction of any Aboriginal culture or mythology. No offense is intended. If any is given, please forgive the unintentional ignorance of this writer.
Posted by A.B. Shepherd at 8:00 AM