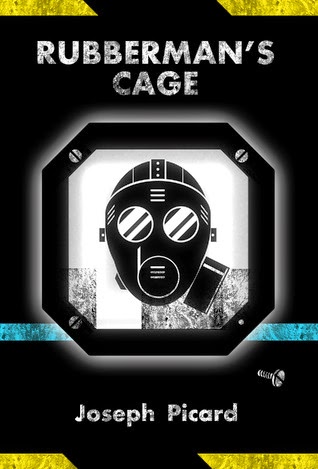 There are many ways I find out about new books. Sometimes I just troll Amazon. Often I ask friends for recommendations. I read newsletters. And then sometimes, as in this case, I just see discussions and decide to check out the book in question.

With Rubberman's Cage, one of my friends was organizing a book tour for this author and novel. I could have been a part of the tour but chose not to because I really didn't want to have to deal with time constraints and whether or not I felt like finishing the book, but the book looked interesting and wasn't too costly (my frugality wasn't offended, haha) so I picked it up to read at my leisure. It just happens to be the last book I read in 2014, finishing it up on New Year's Eve.


In Rubberman's Cage we have the story of Lenth. Now I happen to hate that name for a character. The story explains it was Length but everyone got too lazy to say the g. Okay I guess. It's Picard's dystopian world so he can do what he likes with the names of his characters. Still hate it.

Lenth lives in a controlled environment with his three Brothers (Picard's capitalization, not mine), and above them through a grate lives the Rubberman. The Rubberman never speaks. He stomps on the grate to get their attention, and shocks them when they don't do as they are supposed to, or don't follow their routine. They eat, exercise, work, shower, and sleep. That's it. All in their tiny little three room world. But one day when their Rubberman isn't directly overhead, someone peeks his head through the ceiling in the Rubberman's room, above their grate, and Lenth figures out there are more than four people in the world (is the Rubberman a person?) and there is more to the world than just the Brothers' rooms and the Rubberman's rooms.

The story goes on as Lenth manages to escape his world and explore the world he never knew existed. With his isolated history he is, in many ways, like a small child. He's never seen a female and doesn't even know they exist. He can't read. He doesn't really know anything. But he's curious and he's eager to learn and explore.

Oddly, considering the world around him, he is allowed to. I won't go into much more detail because I don't want to spoil the story for you.

I will say the book wasn't what I expected, although I am not sure what I expected. It turned out to be sort of a coming of age story of a grown man, combined with a morality tale, and with a cautionary look at what our future could become.

I didn't dislike it, but I didn't love it. I'm not even sure if I liked it.  But I will say it was interesting and it left me thinking, so all in all, not too shabby.

Want to check it out for yourself? Last time I looked it was only 99 cents for Kindle, although I can't guarantee that price hasn't changed so check for yourself. Here's the link to it's Amazon page.

What is the last book you read that left you thinking about it after you'd finished? Please tell me in the comments.

Book Blurb:
Lenth grew up in a lie.

Apparently there's more than five people in the world.

Four Brothers live their lives in an enclosed habitat as directed by the silent Rubberman above them.

When they disobey, they get shocked. This is normal.
It always has been. but when a Brother dies, they learn of death. When he is replaced by someone new, they learn they are replaceable.

When the ceiling above the ceiling cracks open, Lenth plans a journey beyond the known universe:

About the author - Joseph Picard:
Born in 1976, he has lived all over Canada, but has called the Meadow-Ridge area of BC his home since 1992. While cycling to his job as a computer technician, he got into a fight with a car in 2001. The car won, and Joseph became a T5/6 paraplegic. This has not hampered his chances at winning the superbowl, as he's been a self-declared nerd for as long as he can remember.

Since his injury, he has focused on his writing and a little on his art, much of which is related to his fiction and can be found at www.ozero.ca. In May, 2007 he became proud father of Caitlin, followed in 2011 a son, Lachlan.

He awaits the day that stemcells or super awesome telekinetic flight powers will allow him to unfurl his black trenchcoats yet again.
Posted by A.B. Shepherd at 8:00 AM