It really was "No Place for a Woman" by Mayse Young, Gabrielle Dalton #Aussiehistory #bookreview 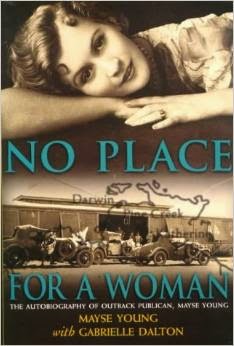 I promised you new reviews, right? Here's the first of several coming up.

So you know about my Fibre Craft group. My friend Brian from the group loaned me this book and told me I needed to read it. (He has also loaned me the entire Cosmos DVD series - what a great friend!)

Brian used to live in the Northern Territory for awhile. In fact, the local aboriginals called him "Old Brian of the White Mob" which he assures me is a name that denotes their respect of him. No, that's not sarcasm.

So this is the autobiography of Mayse (pronounced Maisie) Young. She's a very well-known historical figure in the Northern Territory of Australia where she and her family operated several hotels/pubs throughout the 20th century.

This book tells of her childhood years roughing it, growing up in bush tents following her father around the country as he worked the railroads before they bought their first hotel, and goes all the way up through hurricane Tracey which leveled Darwin in the 70s.

It's not the best written book I've ever read, but it is chock full of everything that makes Australia a great country; local color, slang terms, interesting characters and stories and she lays it all bare. It also contains some very cool old photos.

If you want a taste of Australia in the early to mid 1900s this book is for you. In fact, once I finished it I asked Brian's permission to loan it to my father-in-law who spent some time up that way during his military years. He was aware of Mayse Young, and he said it brought back a lot of memories for him.

It's not available as an ebook, but you can get the paperback pretty darn cheap on Amazon.

What's your favorite autobiography? Tell me in the comments.

Book blurb:
Pine Creek publican Mayse Young was a legend by the age of twenty. In the Northern Territory of the thirties and forties she reared seven children. She was also "mum" to hundreds of stockmen, miners and drifters for whom her hotel was the best drinking hole on the track. Here, Mayse Young writes herself into Australian legend.
Posted by A.B. Shepherd at 9:00 AM