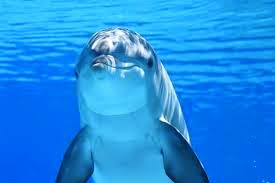 She suited up in her wetsuit. It was the first time she'd worn one and it felt a bit strange, the way it hugged her skin. Her mind wandered into daydreams as the Dolphin Expert gave instructions and she had to pull it back hard. Anticipation made her flesh tingle and her steps bounce.

"...okay, have you got it? It's nothing to be nervous about. The dolphins are used to swimming with humans and they are very friendly," the Expert finished.

"Got it," she answered, standing at the side of the pool watching her favorite mammals prance around, splashing and diving, talking in that chirping way that dolphins do.

With a last glance at the Expert she took a deep breath and jumped into the pool. As she surfaced she swam gingerly toward the dolphin nearest her. It chirped at her and nudged her hand. She gingerly reached forward stroking the dolphin's long nose. Its skin felt just as she'd imagined, cool and smooth. It tossed it's head and she pulled her hand away, laughing with delight.

She reached again as it brushed against her, running her hand over it's head, past the blow hole, and over it's back. The dorsal fin was rigid and firm as she stroked it. The dolphin swam forward, pulling her along. She'd seen videos of dolphins taking people for a ride, so she hung on to the dorsal fin, her face split into a wide grin as she was pulled through the water far faster than she could swim.

As the reached the far side of the pool, the dolphin stopped. She released the dorsal fin and tread water, and it turned to face her. It chirped at her again. She caressed it's nose and mused outloud, "I wish I could understand what you are saying. What stories you could tell."

Her hand still on its muzzle, she searched its black eyes as if she could read something there. She felt an unusual warmth flow through her hand and move up her arm to her shoulder and then up her neck to her head, and course down her entire body. Her eyes were still locked on the dolphin's when she heard a voice.

"I have many stories to tell you. Stories you will share..." The voice paused, then continued. "I always thought it was just a myth, purely legend. But it's true."

Somehow, the dolphin was speaking to her and she understood. It wasn't chirping, or speaking with its mouth. It was speaking telepathically.

"What was legend?" she asked.

"We have a legend that says one of our ancestors had a psychic connection with a human, many years ago. That it is possible." 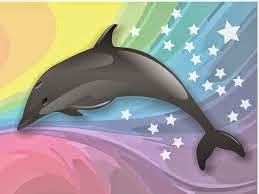 "This connection you and I are sharing, the ability to speak to each other. This is not common. In fact, it has only happened once before between our species and yours. Legend says that when the time is right a human will come along who is destined to share our stories with man. That human will change the course of humanity."

"I am that human?" Such an idea was ludicrous. She was no one special. Just a woman with a tick on her bucket list.

"You must be, for we are speaking."

"So exactly what is it I am supposed to do?"

"When you leave here today, our connection won't end. We will be able to speak like this even when we are far apart. I will tell you stories. Such stories. Tales of what lies deep in the sea. Tales of our legends. Tales of the past and the future. You will record these tales. You will write them down and you will share them with humanity. You will become a storyteller. You will become a writer. The world will believe your stories are fiction, but they will read them and they will learn. And you...will change the world."