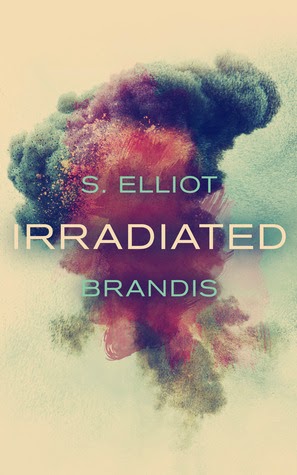 So remember when I told you I asked my Australian Writers group to pitch me their dystopian novels? Well this is another one that I purchased based on their recommendations. Irradiated is the first of a trilogy. Book two, Degenerated, is also available now, but book three is yet to come.

In the world of Irradiated, something horrible has happened. We are never told what, but most would assume a nuclear blast or some sort of nuclear fall-out because the world above ground is no longer safe for human habitation due to radiation.

Most people live underground, in tunnels. When those who are desperate enough venture forth and are exposed to radiation, the radiation causes
mutations of genes and their future offspring become "Irradiated" = mutated in some ways. The tunnel dwellers fear this irradiation and kill those who are irradiated. In this particular story the mutations are quite varied.

Jade, our heroine was born before her father ventured forth, but her baby sister Pearl is irradiated. Jade's sole purpous in life is to protect her sister from those left in the tunnels who would kill her for being irradiated, and from the ruthless land dwellers who would kill them both to steal anything they could use to survive.

It's a story about the love between sisters, and how far you might have to go to survive.

This is a book that is very well written. The author has an almost poetic gift for his (often grisly) descriptions of this horribly bleak world. The story is strong and the plot well thought out. I can find no fault with this book at all. The only thing that kept me from giving it a perfect score is because it IS so bleak. While this book is everything I asked for in a dystopian novel, it was a bit dark even for me. If dark is your thing, you will love this book. Even if that isn't your thing, you might enjoy it.

Book blurb:
A baby is thrust into Jade's arms with one instruction: escape from the tunnels and never return. The world outside is sun-scorched wasteland. Jade has a sister; she is irradiated.

Thirteen years later, her sister, Pearl, is coming of age. Rows of suction cups line her arms and hands, and her skin is coral pink. Each night, her dreams fill with visions of violence, depression, and fear.

On the surface, people have grown wild and dangerous. They scavenge, fight, and steal. Below, in the tunnels, they're controlled by a ruthless leader and an army of beings known only as Shadows. When both groups come searching for Pearl, sensing the power her dreams may hold, only Jade can stand in the way.

About the author:
S. Elliot Brandis is the author of Irradiated, the first novel in a trilogy. He lives in Brisbane, Australia, and often sets his stories there, too. He loves hearing from readers, and can be found at many locations across the internet.