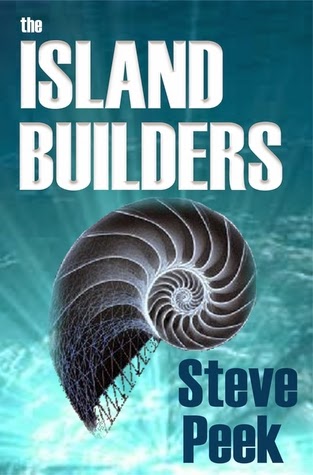 A friend of mine posted something about this book on Facebook (jeez, I've been talking about Facebook a lot lately), and I was so intrigued by the premise that I begged the author for a review copy, which he graciously gave me.

Get this. You wake up one morning, and all of a sudden, along every coastline in the world, there are new islands that appeared overnight. Cool idea right? What in the world is going on!?!?

I was so intrigued that I have been more excited to start this book than any I've read in a a long time. So that's what hooked me. I'm so into ideas of the unexpected and unexplained. I LOVED this concept.


The storyline didn't quite go the way I expected, which isn't a bad thing. I like to be surprised by how others think.

I have to say, I know absolutely nothing about physics, so I have no idea if the authors references to physics are accurate or not and I really don't care. They were interesting to say the least.

I loved the nods to old conspiracy theories, like Roswell. Loved the Three Amigos.

I could have done without the sex scenes, but I pretty much say that about any book with explicit sex scenes. Although these were explicit, they also didn't overwhelm the book - only about 5 pages in total of them, so not completely off-putting for me.

This book is a completely unique take on the end of the world as we know it and I'm really glad I read it.

The book's blurb says it's a novel that will haunt your imagination forever. I don't know about forever, but at least for a little while I will be thinking about this book. And that says a lot.

What have you read recently that left you thinking about it long afterward?

Book Blurb:
The Island Builders stands alone in and vast collection of apocalyptic dystopian books.
Imagine coastal dwellers around the world wake one morning to discover islands occupying what yesterday was open sea. Now imagine governments rattling sabers to claim these new lands yet, so far, not a single person has been able to set foot on one of them.

Then people begin to go missing. First by the thousands, then hundreds of thousands, they vanish at an exponential rate until hundreds of millions have disappeared without a trace. When the number of missing reaches critical mass, civilization’s wheels fall off. Life gets hard and mean, fast.

The story follows a rogue physicist, an unstable President, a beautiful TV reporter in a desperate, mean, dehumanized world which ends not with a bang, or a whimper, but with a sigh.

A post-apocalyptic mind-bender that somehow manages to convince the end of the world is not just nigh, but may turn out to be a good thing after all.

Steve Peek’s The Island Builders tells the riveting story of strange new lands no-one can reach and how their sudden appearance leads to the collapse of civilization and the disappearance of millions of people.

Against this terrifying background, we follow the linked plight of a rogue physicist, an unstable President, a beautiful TV reporter, and three of the weirdest aliens ever to appear in literature as they attempt to save a world gone mad.

A novel that will haunt your imagination forever.

About the author:
Steve began writing full time in 2012. Though he wrote and managed to have a couple of books published during his life, something clicked a few years ago and now, for better or worse, he sits at his table researching and writing about things that interest him.
Steve's forty year career in the game industry allowed him to travel extensively and explore histories and myths of peoples and places. He loves all things ancient and digs deep into lore and enigmas.

His books on Amazon include:

In addition to writing, he works in a vegetable garden trying not to be herbicidal, walks in the woods with a rescued dog and gathers imaginary eggs from a few cut-out, wooden yard hens.
Posted by A.B. Shepherd at 11:16 AM