The book that made me love sci-fi. #amreading #Ilovescifi 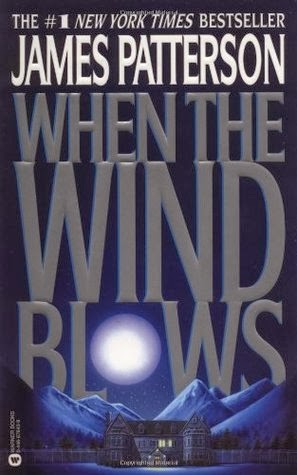 This is NOT a book review. This is just a little post to give you a tiny bit of insight into my soul.

Many moons ago - YEARS ago - before ebooks and Kindles existed, before I discovered Indie authors - before the world of books became what it is today - I was a an avid reader

I've always been an avid reader from way back in my preteen years - and I am OLD now.


I started out reading sweet and innocent Harlequin romances, moved on to bodice rippers and stuck with those for many years. I think I was probably in my early 30s before I branched out to other genres.

That's when I discovered mysteries and I fell in love.


James Patterson was, at that time, one of my very favorite mystery authors - not like now when most of his books are "co-written" by others. I guess once you get so rich and famous you don't even have to author your own books anymore. *sigh*

Anyway, in delving into the mystery genre, I came across When the Wind Blows - James Patterson's first foray into sci-fi, centering on genetic experiments done on children. I LOVED it and I immediately read it's sequel, The Lake House.

James Patterson later took Max and some of the other kids from When the Wind Blows and created a YA series called Maximum Ride. I've read a few of them and they aren't bad, but nothing can dim my fondness for When the Wind Blows.

Interested in checking it out for yourself? Amazon has the paperback - used - from only $.01. Click here to go to the Amazon page for When the Wind Blows.

What book helped you discover a love of a new genre?


Book Blurb:
October 1998
With five previous number one megabestsellers to his name, James Patterson can take some risks. Acclaimed for his Alex Cross series — Along Came a Spider, Kiss the Girls, Jack & Jill, Cat & Mouse — Patterson strikes an entirely new chord with When the Wind Blows. A chilling suspense novel — perhaps too realistic for comfort — Patterson combines jaw-dropping scenes, heart-pounding plot twists, and memorable characters in one unforgettable package.

Set against a sinister backdrop of genetic engineering and illegal scientific experimentation, When the Wind Blows dares readers to test their notions of human evolution and medical science. Frannie O'Neill is a caring young veterinarian living in the Colorado Rockies, trying to erase the memory of her beloved husband's mysterious murder. It is not long before another neighbor suddenly dies, and FBI agent Kit Harrison arrives at Frannie's doorstep. Kit is hell-bent on solving the heinous case despite resounding protests from the FBI and the thrashing of his own internal demons.

Kit secretly pursues the investigation, yet witnesses keep turning up dead. Then Frannie stumbles upon an astonishing discovery in the nearby woods, and their lives are altered in ways they could never have imagined. Simply knowing the secret of Max — the terrified 11-year-old girl with an amazing gift — could mean death.

But perhaps not so unfathomable: Doctors and medical researchers who have read Where the Wind Blows say the events described in this book could actually be a reality in the next 20 to 30 years. If not before.
Posted by A.B. Shepherd at 8:00 AM