So Abites - not long ago I shared with you my review of Dying for a Living (click here for review) by Kory M. Shrum.

The lovely Kory has been kind enough to take time out of her European tour to sit down and answer some hard-hitting questions for me and for you. Curious minds and all that. Are you ready to have your mind blown? You really need to read Dying for a Living. It is due to be released on March 4th.

Even though it is not available yet, if you are a member of Goodreads you can put it on your "to read" list by clicking this link: https://www.goodreads.com/book/show/20645968-dying-for-a-living

And if you want to know THE MOMENT the book is available, you can sign up for Kory's mailing list here: eepurl.com/LCLu5
Welcome Kory! I'm just going to jump right in here, okay?
Dying for a Living rocks! What inspired this story? I loved the correlation you showed between Necronites and the hypnic jerk. Made perfect sense to me.
Thanks! It made sense to me too. Jesse was a character I had in my mind for a long time, but it wasn’t until 2008/2009 that her occupation, NRD condition, and her
story—began to take shape. I already had the basis for her character mapped out, but something was missing. At the time, I’d just started reading “How I Write” by Janet Evanovich.  Somewhere in the book (don’t ask me where), Evanovich mentions the American preoccupation with work—how we are fascinated with how others “make their living”. And that is when I realized what I was missing—Jesse’s occupation! And when I realized that Jesse died for a living—the idea just stuck and evolved from there.
Jesse was abused as a teenager by her stepfather and consequently struggled emotionally until (and after) she took drastic action. Are abuse, its consequences, and creating awareness of it issues close to your heart?
It isn’t abuse in particular that is close to my heart, but rather the problem of powerlessness. Jesse has spent the majority of her life feeling powerless, due to any number of circumstances (and people). It is the reclamation of power and overcoming suppression that I care about. And it is the core motivation in Jesse’s evolution as a character. I think many people, particularly women, have felt powerless in one form or another, and will definitely relate to Jesse’s struggles for this reason. 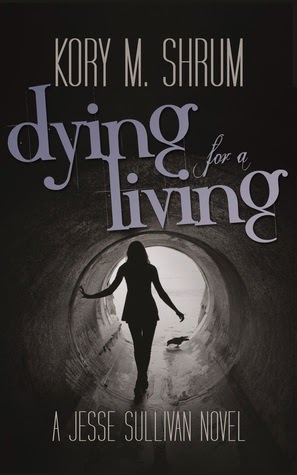 In Dying for a Living the Church is unified as one Church for all religions worldwide. How did you come up with that idea? Do you think such a thing could solve the religious wars that plague the world now?
I wanted “The Church” to be more of an overwhelming ‘presence’ or ‘force’ in the novel rather than point a finger at a particular sect. I wanted to illustrate the ways that some people use faith to suppress rather than support others. So for this reason, I blurred the lines quite a bit. And no, I don’t think such a thing could solve religious warring. In that case, I think acceptance and diversity are the answer—not assimilation.
Jesse has had sexual relationships with both her boyfriend, and her best friend. Did you think twice about creating a bi-sexual protagonist? Did you worry about negative feedback? Do you think sexuality in fiction is no longer the hot-button issue it once was?
I did think twice only because I wondered if it was cliché to create a LGBT protagonist simply because I’m LGBT myself. I always question whether or not I’m “playing it safe” in writing. I think the only chance I have in producing good fiction lies in always pushing myself out of my comfort zone—so I really aim for that. Eventually I decided expressing my own sexuality openly was challenge enough, and left it as is. Couple that with Jesse’s personality and bisexuality fits her perfectly. I would like to think that sexuality isn’t such a hot-button issue anymore, but that is probably naive. I’m sure someone will hate it. As they say haters gonna hate.
Do you think any part of Dying for a Living might be a prediction for the future of the real world - the way so many great science-fiction novels have been?
While I think it would be very cool if my brain just suddenly decided NOT to let me die, I doubt that will come to pass. Unfortunately.
What can we expect to see more of in the next Jesse Sullivan novel?

Ally. She has her own narrative in the second book that interplays with Jesse’s, giving (I think) a greater dimension to their world and what is happening around them.  Also, Jesse’s true adversary, who was mostly behind-the-scenes pulling strings in the first book, will have a more direct role in her misery this time around. Lastly, unlike the first book, where the worst possible outcome was averted at the last moment—Jesse won’t come out as clean the second time. Expect to see a serious loss.
Are you working on any other projects?

In addition to spit-shining the next Jesse book, polishing a few short stories, and whipping a poetry collection into shape-- I’m also rehauling a YA book titled Water & Dark. In the book, Olivia is haunted by her twin sister, who drowned when they were children. And the witchy, demon-hunting aunts who raised her can do nothing to protect her from the ghost hell-bent on revenge.
And just because I love James Lipton and Inside the Actor’s Studio - I always ask these questions:
What is your favorite word?

That’s a hard one. But I’ve been favouring capricious lately.
What is your least favorite word?
Also hard. It would have to be something dull, something that lacked lyrical qualities, which means I couldn’t do much with it. Something like goiter.
What turns you on?

Flattery. I’m a huge sucker for a good compliment. And I don’t mean just any compliment because I can spot a false/insincere flattery easily. But a compliment that takes me by total surprise in its originality, insightfulness, and/or delivery. Hit me with that and—yeahhh—putty, I tell you.
What turns you off?

Ignorance & bigotry—Small minds make me claustrophobic
What sound do you love?

My pug makes some pretty great sounds. All those snorts are like a whole other language.
What sound do you hate?

Styrofoam. Bizarrely it sends me into some kind of berserker mode. I just want to violently dismember whatever is responsible for the sound—be it a person—or a box.
What is your favourite curse word?

It’s actually not an English word.  Dipuga, pronounced dee-POO-gah which is an Illonggo (Filipino) word that roughly translates to shhhit—like the kind of awww shhhhit that hits you when you realize you’re screwed, or just messed up royally.
What profession other than yours would you like to attempt?

I assume you don’t mean teaching, since that is what I do when I’m not writing. And if so, then I’d have to say something that involves evasive driving. And maybe guns. No, not guns. Just the evasive driving.
What profession would you not like to do?

Anything involving poop. Or vomit. Or snot.
If heaven exists, what would you like to hear God say when you arrive at the pearly gates?

“I’ve made all the preparations according to your taste, my lady. This way, if you please.”

Thank you Kory - I found your answers fascinating - just like I find you and Dying for a Living.

Abites - are you intrigued? Want to put Dying for a Living on your to-read list yet?
Posted by A.B. Shepherd at 8:00 AM