Sob-fest but worthwhile. The Fault in Our Stars by John Green #amreading #bookreview 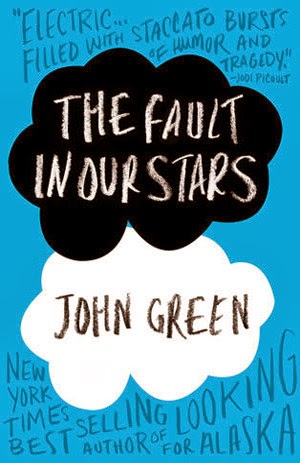 It's a good thing I don't judge a book by it's cover, because I think this is one of the lamest covers I have ever seen.

I've been hearing about this book for a long time - over a year I think. Everyone has been raving about it, but I put off reading it because I knew it was about a dying girl and I try to avoid books about death and dying as I've had a bit too much of that in my life and this type of subject matter often leaves me feeling depressed.

Then I saw that this book was being made into a movie, and I don't know why but all of a sudden that made me want to read it. I bowed to peer pressure. I thought - well I can read the first chapter and if it feels too depressing, I'll just stop. Right?

So I read the first chapter - and I didnt's top. I got sucked right in. This is a truly wonderful book. Yes, it is about a young dying girl, but it is also about first love, and friendship, and not fitting in, and figuring out how to survive loss. It is also about dealing with the disappointment of finding out your idol isn't worthy of your adoration. So much about growing up.


Only one tiny little nitpicky thing. Hazel is oxygen bound and the author in his Author Note does say that the medical information in this book is fictional so I shouldn't even nitpick this but - from personal experience (not my own but my loved ones) the oxygen bound do not use portable canisters in their homes. They don't get enough of them to squander them like that. Instead they drag long tubing around with them because they stay hooked up to their "Phillip" when at home. So that minor discrepancy aside - this is still a 5 star book and I loved every word of it. I read it in one day. Couldn't put it down.

I may have ugly cried a little bit, but it did not leave me feeling depressed at all.

If you'd like to check out The Fault in Our Stars you can click here to go to its Amazon page. It is oddly far cheaper in print than for Kindle.

Are you planning to read any of the books being made into movies this year? Which one(s)?

Book blurb:
Despite the tumor-shrinking medical miracle that has bought her a few years, Hazel has never been anything but terminal, her final chapter inscribed upon diagnosis. But when a gorgeous plot twist named Augustus Waters suddenly appears at Cancer Kid Support Group, Hazel's story is about to be completely rewritten. 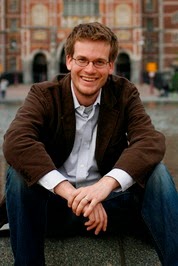 About the author:
John Green's first novel, Looking for Alaska, won the 2006 Michael L. Printz Award presented by the American Library Association. His second novel, An Abundance of Katherines, was a 2007 Michael L. Printz Award Honor Book and a finalist for the Los Angeles Times Book Prize. His next novel, Paper Towns, is a New York Times bestseller and won the Edgar Allen Poe Award for Best YA Mystery. In January 2012, his most recent novel, The Fault in Our Stars, was met with wide critical acclaim, unprecedented in Green's career. The praise included rave reviews in Time Magazine and The New York Times, on NPR, and from award-winning author Markus Zusak. The book also topped the New York Times Children's Paperback Bestseller list for several weeks. Green has also coauthored a book with David Levithan called Will Grayson, Will Grayson, published in 2010. The film rights for all his books, with the exception of Will Grayson Will Grayson, have been optioned to major Hollywood Studios.

In 2007, John and his brother Hank were the hosts of a popular internet blog, "Brotherhood 2.0," where they discussed their lives, books and current events every day for a year except for weekends and holidays. They still keep a video blog, now called "The Vlog Brothers," which can be found on the Nerdfighters website, or a direct link here.
Posted by A.B. Shepherd at 8:00 AM