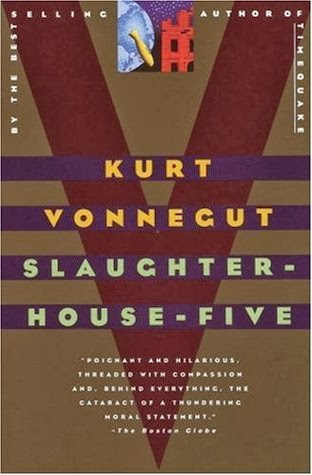 Going into Slaughterhouse-Five I knew that Kurt Vonnegut was reputed to be one of the best science fiction authors of all time, but not much else.

Based on the name alone, I assumed this was some serious science fiction with vicious aliens or a bleak post apocalyptic setting. Boy was I wrong.

Although I suppose this is science fiction - and satire - and absurdism - as it has been touted, that is not my take on this book. I read it as a very sad case of a WWII veteran who suffered severe PTSD at a time long before they knew what PTSD was.


There is black humor, but I didn't find it amusing, although it did lighten the tone of the book. But for me, the sad, world-weary tone prevailed throughout.

It bounces around in no chronological order and so can be slightly hard to follow, but it is easy and captivating reading. I was never  tempted to put it down.


It is powerful. It is absurdism cloaking heartbreak. It is science fiction in its purest form of escapism.

It is something every military official, every politician, and every warmonger should read. And you should read it too.

And so it goes.

Check out Slaughterhouse-Five on Amazon by clicking here.

Book blurb:
Kurt Vonnegut's absurdist classic Slaughterhouse-Five introduces us to Billy Pilgrim, a man who becomes unstuck in time after he is abducted by aliens from the planet Tralfamadore. In a plot-scrambling display of virtuosity, we follow Pilgrim simultaneously through all phases of his life, concentrating on his (and Vonnegut's) shattering experience as an American prisoner of war who witnesses the firebombing of Dresden.

Don't let the ease of reading fool you - Vonnegut's isn't a conventional, or simple, novel. He writes, "There are almost no characters in this story, and almost no dramatic confrontations, because most of the people in it are so sick, and so much the listless playthings of enormous forces. One of the main effects of war, after all, is that people are discouraged from being characters."

Slaughterhouse-Five is not only Vonnegut's most powerful book, it is also as important as any written since 1945. Like Catch- 22, it fashions the author's experiences in the Second World War into an eloquent and deeply funny plea against butchery in the service of authority. Slaughterhouse-Five boasts the same imagination, humanity, and gleeful appreciation of the absurd found in Vonnegut's other works, but the book's basis in rock-hard, tragic fact gives it a unique poignancy - and humor. 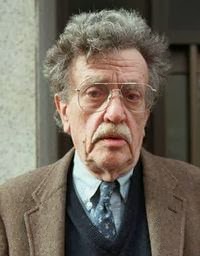 Kurt Vonnegut, Junior was an American novelist, satirist, and most recently, graphic artist. He was recognized as New York State Author for 2001-2003.

He was born in Indianapolis, later the setting for many of his novels. He attended Cornell University from 1941 to 1943, where he wrote a column for the student newspaper, the Cornell Daily Sun. Vonnegut trained as a chemist and worked as a journalist before joining the U.S. Army and serving in World War II.

After the war, he attended University of Chicago as a graduate student in anthropology and also worked as a police reporter at the City News Bureau of Chicago. He left Chicago to work in Schenectady, New York in public relations for General Electric. He attributed his unadorned writing style to his reporting work.

His experiences as an advance scout in the Battle of the Bulge, and in particular his witnessing of the bombing of Dresden, Germany whilst a prisoner of war, would inform much of his work. This event would also form the core of his most famous work, Slaughterhouse-Five, the book which would make him a millionaire. This acerbic 200-page book is what most people mean when they describe a work as "Vonnegutian" in scope.

Vonnegut was a self-proclaimed humanist and socialist (influenced by the style of Indiana's own Eugene V. Debs) and a lifelong supporter of the American Civil Liberties Union.

The novelist is known for works blending satire, black comedy and science fiction, such as Slaughterhouse-Five (1969), Cat's Cradle (1963), and Breakfast of Champions (1973)
Posted by A.B. Shepherd at 8:00 AM