NOT a YA novel! The Cloud Seeders by James Zerndt #amreading #bookreview 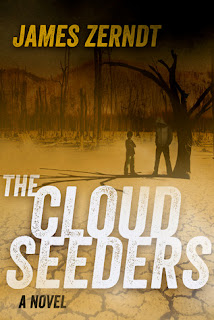 The Cloud Seeders is a dystopian science fiction novel where the USA is in a severe drought and you can be punished for using water and energy. Two young brothers who have been surviving by working as water police, set off on a journey to find their parents - their father is a scientist who has been working to develop weather control technology.

This is what drew me to this book. I've recently been doing some research on weather control technology because I'm considering using it in some of my writing and to find this book with that as a plot device intrigued me.

I've read several reviews by others. Some were quite critical because the readers didn't like the profanity and the single sex scene in this book. I will say, in my view the sex scene was not extremely explicit, and I fully believe in writing a book to be as believabl as possible. In this  story where you have two boys - one a teenager in charge of the younger, who've been on their own for over a year - I think the profanity adds realism.


However, despite the age of the protagonists and how it has been classified, this is really not a Young Adult (YA) book. It's listed on Amazon as a children's book. Nuh uh. It's not. New Adult? Maybe. The subject matter in this book is not suitable for children or young teens. At least not in my humble opinion.

I did, however enjoy this author's take on such a dystopian future and I didn't want to put it down. I found the ending a bit simplistic, but I was still satisfied with it. Overall I really liked it.

If you'd like to check it out for yourself, just click here to see it on Amazon.

What is your favorite dystopian plot device? Which books have you read that use it?

This is the slogan of the Sustainability Unit and of a country gone eco-hysterical. After nearly twelve months without rain and the hinges of the world barely still oiled, Thomas and his younger brother, Dustin, set out across a drought-ridden landscape in search of answers. What they discover along the way will change their lives, and their country, forever.

"Zerndt is a real talent and THE CLOUD SEEDERS is an intense journey into a new land, a parched Pacific Northwest, where water police roam the streets and people no longer bother to look up for rain." -Pete Fromm, author of AS COOL AS I AM and INDIAN CREEK CHRONICLES 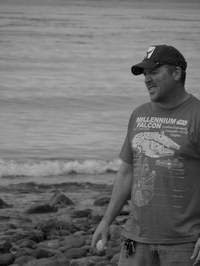 About the author:
James Zerndt lives in Portland, Oregon, with his wife and son. His poetry has appeared in The Oregonian, and his fiction has most recently appeared in Gray's Sporting Journal and SWINK magazine. He recieved an MFA in Writing from Pacific University and rarely refers to himself in the third person.
Posted by A.B. Shepherd at 8:00 AM