A history lesson in a fiction novel. Sliding Beneath the Surface by Doug Dillon #amreading #bookreview 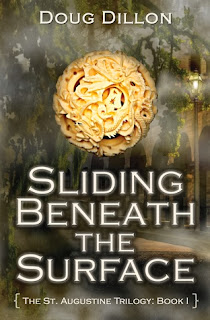 Sliding Beneath the Surface is the first novel in The St. Augustine Trilogy. In this novel Dillon introduces us to Jeff Golden, a lonely, lost teenager, his would-be girlfriend Carla, and Carla's friend/mentor Lobo.

I'm not sure if this is intended to be a YA series, but it is certainly clean enough to be. You all know I am a fan of YA stuff so my review below is not a reflection on the fact that it is a YA book.

Jeff has recently moved to St. Augustine. His father is dead and his mother neglects him. His only friend is Carla. Strange things start happening to Jeff. He has nightmares that are keeping him from sleeping and things only get weirder from there (for him).


Carla introduces Jeff to her friend Lobo, because Lobo is a Native American shaman and she thinks he can help Jeff with his problem, because he helped her with her own paranormal issue before.

I really wanted to love this story. Worlds within worlds within worlds. Ghosts. The whole shabang. The concept was great and I DO love me some paranormal stuff. I was also intrigued to find the author has co-written a non-fiction book about his own paranormal experiences. Something I just might have to check out.

But when it comes to Sliding Beneath the Surface, for me it felt more like a history lesson wrapped up in a novel in an attempt to get teens interested in history. Yes, history is important. History in novel form CAN be a good thing, when done well. But for me there was just too much emphasis by the author on getting all the tiny historical facts about this battle in the novel. It made it feel a bit tedious at times.

Many of the reviews for this book have said how much the reader loved the character of Carla because she was spunky. I didn't feel that way. I didn't feel like Carla was a very developed character at all. Maybe that is because the story was told from Jeff's perspective, but I never got a real sense of Carla. Oh sure, she would say something a bit spunky now and then, but for me she was just coleslaw on the side, ya know? Jeff was the main course and he needed a side dish. The coleslaw is there whether or not it is appetizing.

Jeff was a so-so character for me as well. Yes, he was a teenaged boy and so his moody rebelliousness was in character, as was his disbelief in adults having superior knowledge. But he just lacked something - something I can't define right now - to make him feel genuine for me. Where I would have expected him to turn to Carla as his only friend, he avoided her. Didn't quite make sense to me.

My favorite character was Lobo. I'd love to read more with him as the main character. He is the mystical, all-knowing spiritual guide. HIM I found fascinating.

I don't know where Doug Dillon is taking this series. I don't know if Jeff and Carla will feature in the remaining two books, or where Lobo will fit in.

If you are a fan of history written in novel form, and you are interested in the Seminole wars, with a bit of paranormal thrown in, you just might really like this book. It didn't quite do it for me, although I did find it educational.

If you'd like to get Sliding Beneath the Surface for yourself, you can get it on Amazon. Just click here to go to the Amazon page for it.

What is your favorite book that captured a real life event in a fictional format?

ne, Florida, teenager Jeff Golden is in trouble. Horrible dreams won’t let him sleep, and he is up to his eyeballs in terrifying, paranormal experiences.

Finally, Jeff turns to his girlfriend Carla, and Lobo, the mysterious Native American shaman, for help. But what he discovers is a lot more than he bargained for.

A ghostly presence linked to a local historic cemetery is not only threatening Jeff’s sanity but his life as well. And before he knows what’s happening, Jeff finds both and Carla pulled into one of the nastiest and bloody events in Florida history. It is a place from which they may never escape.

About the author:
An award winning author and educator, Doug writes about things paranormal and historical. His interest in the paranormal comes from personal experiences as detailed in the nonfiction adult book he and wife wrote titled, An Explosion of Being: An American Family's Journey into the Psychic. Out of those events and extensive historical research, he then created Sliding Beneath the Surface for young adults, Book I of the St. Augustine Trilogy. Doug set his trilogy in the oldest and most haunted city in the United States, St. Augustine, Florida. Books II and III of the trilogy are on the way.