Interview with Marsha Cornelius and excerpt of Losing it All. #amreading @marshacornelius 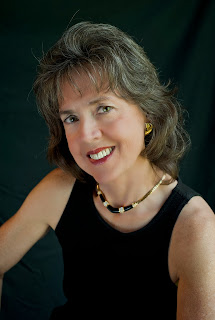 A couple of years ago author Marsha Cornelius asked me to read her debut novel, H10N1. I did and I loved it. You can read that review here.

Marsha is back with a new novel, Losing It All, and she has graciously consented to allow me to interview her and share an excerpt with all of us.

Hi Marsha - it's great to see you again. Tell me - Your latest book, Losing It All, is about homeless people. How did you research the topic?

Well, I didn’t live in a car for 6 months, if that’s what you’re wondering. But over the years, I’ve had my share of interaction with the homeless. I’m not a believer in giving cash, but I’ve left bags of clothing in the park instead of the Salvation Army. I’ve bought homeless people food.

I also volunteered at a soup kitchen, and I visited the women’s shelter in Atlanta. A lot of what I saw appears in the book. 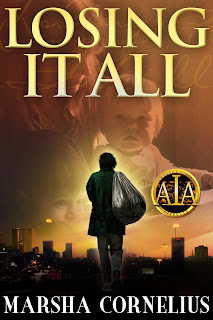 What kind of response are you getting to a book that is basically about people who have nothing?

I was afraid people might shy away from the theme of destitution, especially since the economy in nearly every country has taken a beating in the past few years.

During the Depression, Busby Berkeley filmed extravagant musicals filled with chorus girls dancing and singing, to allow people to escape from reality. But these days, I think people want to understand what is happening. They want to be informed.

So the response to Losing It All is mostly positive. Yes, there are depressing scenes in the book, but nothing the characters can’t handle. And isn’t that what life is about?

I understand the book is written from two POVs. Why did you decide to write the book that way?


The two characters come from different worlds. Frank has been living on the streets for the past 12 years, so he’s almost a veteran to the experience. Chloe, on the other hand, has never experienced anything like it. She’s certainly not rich, but losing your possessions, being evicted? I don’t think many of us are prepared to deal with something like that.

Point of View is tricky. If you want to allow your reader to really get into someone’s head, you have to show their POV. And since my two characters come into this story from such different directions, I decided to let the reader into both of their heads.

It’s not as confusing as say a romance novel, where each paragraph can jump from his thoughts to her thoughts. Each chapter is told from one character’s POV. I wanted the reader to see how differently the same situation could affect two people.


How did you come up with the idea for Losing It All?

When I first moved to the country north of Atlanta, I came across an abandoned house in the woods near a small horse farm. There was so much underbrush that you could barely see the house. The windows were all busted. Inside, the walls had holes punched in them, but the floors were sound, the roof kept the structure dry.

I thought it was a shame that no one had kept the place up. And it occurred to me, that for someone who sleeps on a park bench, or under an overpass, that little house would be a great improvement. The idea just snowballed from there.

Are you working on your next book?


Oh, sure. I’m always somewhere in the process of a book: dreaming up an idea, hammering out the details, or marketing a book that has already been published.

My next book deals with peoples’ reliance on pharmaceuticals for everything from their peace of mind to their weight. We’re a quickly becoming a nation that doesn’t want to deal with our problems, we just want to take a pill and make it all better.


Wow - sounds intriguing - AND highly accurate. What a great concept for a book. Marsha, where can readers find you?


I have an author’s page on Amazon, where you can see all three of my books. Here are the links:


If you want to drop me a quick line, use Twitter.  https://twitter.com/marshacornelius


To gab about books, hook up with me on Goodreads:   http://www.goodreads.com/author/show/4993738.M_R_Cornelius
And if you want to read my blogs, go to my website: http://www.mrcornelius


Can you give us a brief taste of Losing It All?


Sure. Here’s a quick look at Frank, a homeless vet how has been living on the streets since he came home from Vietnam.


As soon as the sun went down, the night air regained its bite. Frank zipped his jacket up to his raw chin. The front wheel of his grocery cart squeaked as he pushed a load of rotten lumber toward his favorite convenience store. A hooker stood under a street lamp, displaying her wares to drivers that passed. When she saw Frank, she relaxed her pose.


“Hey, Diamond.” Frank parked his buggy against the lamppost. “How you doing?”


“Glittering, honey.” She fluffed her Afro with silver fingernails.


“Got some sugar for you.” She cocked a leg out and ran her hand up her fishnet stocking.


Those fingernails had raked a good chunk of flesh off Frank’s forearm the first time he met Diamond all those years ago. His GI cut had grown just shaggy enough that she thought he was an Emory student on his way to the Plaza Theater. But when she offered to suck his dick, he flashed-back on those whores in Saigon, and took a swing at Diamond with the pint of Sloe gin he’d been guzzling. He grazed the side of her head, and she came after him, her arms whirling like a windmill.


Frank had tried to retreat but somehow Diamond got a fistful of his hair. Her shiny silver high-heel drew back, and when Frank saw her knee rise up toward his crotch, he cried out, fell to the sidewalk, and curled into a fetal position, clutching his jewels.


She could have laughed at him, or taken advantage of his sniveling by kicking him with said silver shoe. But she knelt and helped him to his feet. “Come here, Sugar. Why don’t you tell Diamond all about it?”


Between slurps of gin, he told her about the horrors of Vietnam, and how he’d been compensating ever since with drugs and alcohol.


“Watch my stuff?” he asked Diamond as he reached for the door handle.


She swiveled her hips. “Like you be watchin’ mine.”


Inside the deserted convenience store, a clerk perched on a stool, watching a small black and white TV. A little old lady in a commercial stepped up to a counter and grumbled, “Where’s the beef?” The clerk laughed and tried to mimic the phrase in his heavy accent. He grinned and nodded at Frank for approval.

Marsha thanks so much for stopping by and telling us all about Losing It All. I wish you much luck with it. Abites - check out Losing It All, and if you haven't already - be sure to read H10N1.

I hope you will be to come back and tell Marsha and I what you think of it.