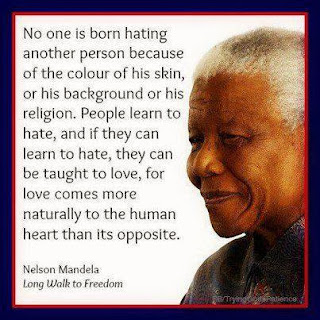 I was saddened to wake up to the news yesterday that Nelson Mandela had passed away at the age of 95. He was a man who instigated great change in this world and the world was a much better place for his presence in it for 95 years.

Facebook is a wonderful place at times. People can come together and share their sorrow over such a loss to the world.

As the day went on I saw so many memes in tribute to this great man. My feed became a wall of those expressing their thanks and their sorrow.


But Facebook is also a horrid place at time, because there are so many ignorant people on there too, including some of my family and friends. And late last night, one of my so-called friends posted this meme. And I became livid. 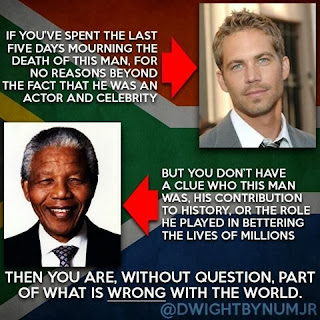 No one has the right to trivialize the death of one man just because he wasn't another. There is room for the world to mourn both.

Maybe Walker wasn't Mandela - so few of us are anywhere near as important to the world. But Walker was only 40 years old. Who knows what he could have done with another 55 years of life, like Mandela had lived.

Maybe his most visible contribution to the world to date was his presence in the Fast and the Furious franchise - which brought pleasure to millions. Was it life altering? Perhaps for some, but not for most.

But from all reports he was also a loving father to his teenaged daughter. An important contribution to her life surely.

Also, at the time of his death he was in the midst of a fundraising campaign for the victims of the recent catastrophic storms in the Phillipines. I'm certain his efforts there were making a huge difference for MANY. Doesn't that justify his importance to the world? Aren't we allowed to mourn him now? That MUST make him worthy of public sorrow - doesn't it?


And then there was this insensitive Facebook meme earlier in the week. 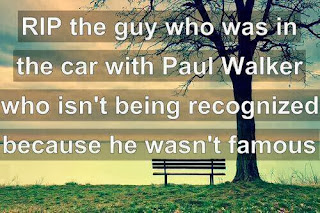 If you get your news from REPUTABLE sources - Walker's name might have been the first released following th eaccident, but it was soon reported that the driver of the car was his friend, Roger Rodas. Not some "unnamed other guy".

So in summary - a death is a death and it is right to mourn.

Some of the deceased will have more mourners than others and that is okay.

Do you really think Mandela would approve of your shaming those who mourn Walker's death? I didn't think so.