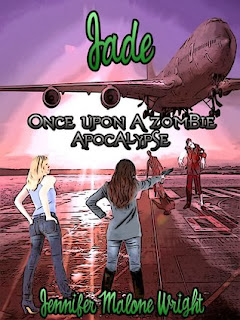 Don't ask me why I picked up this book. Although I've read zombie books before it is not my favorite genre. I think I snagged it because it is short - only 50 pages according to Amazon - and I was looking for a quick read. Plus I saw that the main characters were two authors who had been attending an author conference when the zombies appeared. Kind of intriguing, don't you think? At least from an author's view.

What I like about this series is the concept. The series is written by two authors who are collaborating on these "episodes" as they are calling them. The first two novellas in the series are written from the two perspectives of the main characters - Jade and Kaylee. Following that, I've read that the episodes are no longer written from separate perspectives.

What I didn't like. The story in this first episode was written fairly well and was a bit funny, intentionally so. The were two little problems for me - and maybe you wouldn't even notice them if you were reading this. I found that the characters reactions to the zombies were a little bit far fetched. I realize these characters were writers of vampire fiction and maybe that was supposed to be why they didn't react as I would have expected, but it did bug me a little bit.

Also, the writing style was annoying for me in a few places. Again, it probably wouldn't bug the average reader. It just bugged me.

Overall though, I did get a kick out of this little book and the concept is really pretty cool. I'd give it a solid three and half stars.

What do you think? Is episodic fiction published as novellettes (they are calling it a novella, but I'm not sure it really qualifies as one) the next new phase in Indie fiction?

****This book is NOT intended for a young adult audience****

Chemical Warfare has turned most of the world’s population into flesh eating Zombies. These are the accounts of two survivors.

Kylee and Jade are on their way from one author convention to another. After saying goodbye to all their friends, they never dreamed the plane would land with them fighting for their lives.

Jade Warwick has been preparing for the end of the world for years, but she never thought the world would end with zombies. The only thing salvaging her almost lost sanity is the fact that she is with her best friend, Kylee.

With their first mission being to find their families, will the girls manage to save their families while trying to save each other?

***Once Upon A Zombie Apocalypse or (OUAZA) as the fans call it, is a short story episodic saga written by K.B. Miller and Jennifer Malone Wright. The first episode is from both Jade and Kylee's perspective and is two separate novella's. The same story, but from two different characters. It is done this way with the first episode only, so that you can meet our girls and really get to know and love them like we do.Each following episode is written solely by one of the authors and available through their links.

About the author:Jennifer Malone Wright is best known for her short story series, The Vampire Hunter’s Daughter. Other works include the follow up to The Vampire Hunter’s Daughter series called The Arcadia Falls Chronicles and her vampire novel called The Birth of Jaiden. Jennifer also co-authors a series called Once Upon A Zombie Apocalypse as well as another project which hasn’t been announced yet.

She resides in the beautiful mountains of northern Idaho with her husband and five children where she practices preparing for the zombie apocalypse. Just kidding!

But seriously, between the craziness of taking care of her children, Jennifer has little time left for herself. The time she does have left, usually leading far into the night, is spent working on her beloved fiction or chatting with her equally crazy friends.

Jennifer also loves coffee, has a passionate affair with red bull, wishes the sushi were better where she lives and dances while she cleans.
Posted by A.B. Shepherd at 9:25 AM