NaNoWriMo 2013 is coming to a close. Are you a winner? #amwriting #nanowrimo 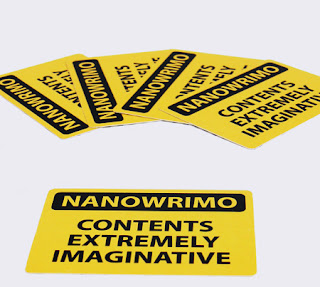 There are only a few days left before NaNoWriMo 2013 comes to a close. Did you win? If you haven't yet, are you on target to win?

For me, this year has been good and bad. I started out strong writing my sequel to Lifeboat, but got sidetracked preparing for the launch of The Beacon (just 3 more days!). It has been much more work than I anticipated and although I am usually pretty good a multi-tasking I really haven't been this month.


I won't win NaNo this year, but that doesn't mean I'm giving up. I do have one more write-in coming up on the 30th and when it is done I hope to be about a quarter of the way through the sequel (I haven't yet come up with a name because I am a pantser and I'm still uncertain where the story will go).

That may not seem like good progress to you, but I'm happy with it. I've found that while NaNo is a good tool to push yourself - especially if you've always made excuses why you can't make the time to write - I don't only write during November now. This means that I WILL finish the sequel even though it won't be done by November 30th.

My favorite thing about NaNo 2013 though, is that my good friend DeAnn has won and it is her first attempt. DeAnn has always wanted to write and has legitimate reasons why making time to write has been quite difficult.

She's a dedicated mom of three and while her eldest two are grown, her youngest is only fifteen and has cerebral palsy amongst a host of other serious physical conditions and caring for him - seeing to the heavy demands of his needs due to his medical conditions - is her full time job.

There are no vacations, no knocking off at 5 o'clock, and no weekends off. It is a 24/7 job that she handles with love and grace every single day.

Somehow, in spite of those demands on her time, with a little encouragement from me and a ton of determination and perseverence on her part, she has managed to make her dream of writing - at least one of the many stories in her head - come true and she is thrilled. I think I am almost as delighted as she is! I keep telling her - and anyone else who will listen - that I get all the credit when she becomes a best-selling author.

There will be a long road ahead yet if she wants to publish what she has written but I am so, SO proud of her. Well done De!

As for me, I'll be back for NaNo again next year, and maybe even for Camp NaNo before November. In the meantime I'll keep plugging away at my sequel.

How about you? Did you make your writing dream come true this year? Tell me about it.
Posted by A.B. Shepherd at 8:00 AM