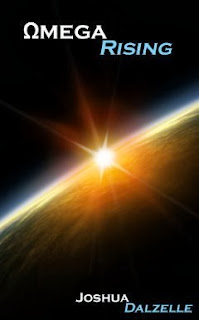 You know when you are shopping on Amazon and you see on the page "people who bought this item also bought..." and there is a list of things there? Well it just so happens that when I looked at Lifeboat's Amazon page this book was on that list. I picked it up curious to see if it was in a similar vein to Lifeboat.

Omega Rising does have some similar elements. It has a space ship, and aliens. That's pretty much where the similarities end.

Omega Rising is the story of Jason Burke, a former military paratrooper who chooses to live in isolation following his discharge, feeling as if he no longer fits in to the world he left behind.  This is very much a "buddy" book. What I mean by that is that Mr. Isolation joins up with a bunch of misfits to become the space equivilant of the A-team.


The book itself is pretty formulaic, but it is a formula that has worked time and again and will likely continue to work for ages. There is a lot of action, some cool technology, an all male cast of characters and the good guys win. If you are looking for touchy feely you won't find it here. I did enjoy it, even though I usually prefer a bit more emotion in my reading material.

What have you enjoyed lately that is outside the norm of what you typically read?


Book Blurb:
Jason Burke was a man hiding from himself in a small cabin high in the American Rocky Mountains when his simple, quiet life was shattered one night by what he first assumed was an aviation mishap. But when he investigates the crash, what he finds will yank him out of his self-imposed exile and thrust him into a world he could have never imagined.

He suddenly finds himself trapped on a damaged alien spacecraft and plunged into a universe of interstellar crime lords and government conspiracies, along the way meeting strange new friends… and enemies. As he struggles to find his way back home he is inexorably drawn deeper into a world where one misstep could mean his death. Or worse. He desperately wants to get back to Earth, but it may be the end for him.

… or is it just the beginning?

About the author:
This author had no biographical information listed on Amazon or Goodreads.
Posted by A.B. Shepherd at 2:35 PM