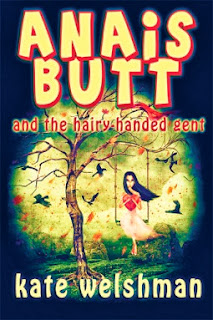 You all know I am a fan of YA books, and from time to time I like to read something just a bit quirky.

I'll admit this one intrigued me with it's title when I came across it on Netgalley.  I got a grabbed my free ARC copy from Netgalley, and...well here we are.

Don't let the title fool you - this is a YA story full of teen angst. There is no sex or pornography here.

Now here's the thing. I will fully admit that when I got to the part in the story where I figured out Shannon's deal, I was initially disappointed. That soon disappated, however. What Kate has done here is created a story that has a lot of great Aussie-ness about it, as well as some fun.

We truly do get to see Anais (pronounced Ah-nay - not Anus as her mean-spirited cousin persists in saying it) grow up quite a bit in this story and I really liked how Kate chose to end it.

Although I don't think it is intended as a moral treatise, Anais learns that her actions have consequences and that grown-ups are really people too - people who were young once. This is a YA novel that is enjoyable for teens and grown-ups alike. Well done Kate!

Have you ever chosen to read a book based on it's title alone? Which one(s)?


Book Blurb:
When seventeen-year-old Anais Butt is expelled from her fifth boarding school in three years, she expects her parents to slap her on the wrist and send her to another expensive school. However, her fed-up parents have other ideas. They decide to exile her to the isolated mountain town of Glenorie to labour for her child-hating maternal grandmother, Nanny Pam and her hostile cousin, Josephine, who operate a riding school on her three thousand-acre ranch on the Turon River. However, before leaving for Glenorie, Anais spends a few days with her paternal grandmother, Nanny Bette, who has a handsome, mysterious guest staying with her in her flat. Shannon Ferguson has told Nanny Bette that he’s an out-of-work actor, but Anais, who finds herself strongly attracted to him, suspects that he’s lying. Shannon seems to be on the run from the police.

When Shannon follows Anais to Glenorie, she’s scared of him and drawn to him in equal measure. He reveals that he’s being pursued by the police over a crime he did not commit. Anais wants to believe the man she’s in love with, but when a German backpacker goes missing and another is horribly injured near Glenorie, Anais can’t help but suspect Shannon.

Finding herself more and more allied with her serious, goody-two-shoes cousin Josephine, Anais sets out to investigate the disappearances herself. Through a series of thrilling but dangerous events, the girls discover that the prime suspect is not Shannon, but the town’s well-respected pastor, Reverend Hobhouse and his band of ‘foster sons’.

After an incident in the bush where Shannon is almost killed, he’s forced to face the prospect of leaving Glenorie, and Anais, forever. And Anais must make her own decisions and discoveries about her past, present and future. She may just have to grow up . . .

About this author
- Kate says: 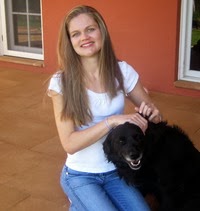 I was born in Horsham, a small town in western Victoria in 1980, but grew up largely in and around Sydney. I have lived in Sydney's rural north west since I was fifteen. I would like to move to a ranch in the Santa Ynez Valley.

I have always loved reading and writing. My greatest passions in life are my family, reading, writing, horses, dogs, the country and beautiful food.

Posse, my first novel, was published in 2009 by Random House. My second novel, Anais Butt and the Hairy Handed Gent, also in the young adult genre, is due to be published by the Writer's Coffee Shop in 2013.

I have an unfortunate habit of developing debilitating crushes on heroes in books. My most pathetic crush ever was on Rupert Campbell-Black from Jilly Cooper's blockbuster 'Riders'. I even named my second son Rupert!
Posted by A.B. Shepherd at 11:13 AM