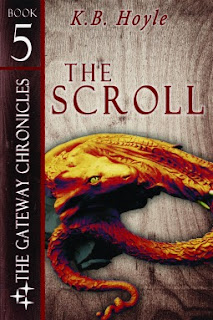 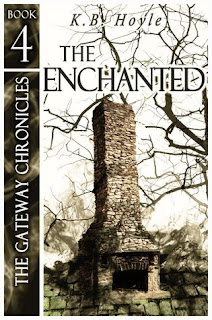 Ya'll know that I just finished The White Thread by K.B. Hoyle. I immediately jumped into The Enchanted which I devoured in a day and then I dove into The Scroll, which I THOUGHT was the final book in  the series. It is not. The final book will be book six which is not scheduled for release until 2014!!!

I can't wait that long!

K.B. Hoyle you are a cruel woman to torture me so!

I loved this series so hard. I am seriously suffering withdrawals and I am morose now. Nothing I'm looking to read next can compare. K.B. has drawn me so far into the world of Darcy and friends that I must know how this story ends and I just feel tortured with pure impatience. K.B. if you read this, please - send me anything you've written to date on book six. I don't care if it's rough and unedited. I'm in pain! Please?


In The Enchanted and The Scroll the saga of The Six continues. Darcy's worry over her oracle has her questioning what is best for those around her, especially Tellius who she has grown to love in spite of her earliest aversion to the idea of being the King's intended. Her need to save the world of Alitheia, and her home world, from Tsellech is still her primary goal, yet her tender heart won't allow her to destroy Colin Mackaby - the one person she fears will be her downfall.

Seriously folks. If you haven't read The Gateway Chronicles you are missing out of some of the best books I've ever read. They have everything you could want in a book series and more. So much friendship, loyalty, indecision, heartache, doubt, danger, betrayal, and best of all fierce love.

Read them. You won't be sorry.

Have you read any of the Gateway Chronicles books? What are your favorite fantasy series?

Book Blurb for The Enchanted (Book 4):
“Enchantments are powerful—the most powerful magic we have,” Rubidius said. “They can change the nature and composition of animate and inanimate things alike, and they can foil the plans of the most determined foes.”

“What do enchantments have to do with me?” Darcy whispered.

Darcy Pennington’s course was plotted out for her long before she ever stepped foot in Alitheia, but Colin Mackaby seems determined to hamper and confuse the way as much as he can. Darcy begins to suspect that it is not Colin working against her, but a malevolent force working through him—a force seeking to hasten Darcy’s transformation into one of the very creatures she is supposed to fight. Darcy is finally willing to follow the prophesied path, even agreeing to her much-resisted marriage to Tellius, but soon after she returns to Alitheia, everything spirals out of her control. A painful rejection almost pushes her over the edge, and when she demands answers from Rubidius, he provides her only with more painful secrets she must keep from the others. In the meantime, Darcy and her friends finally set out to confront one of Tselloch’s gateways, fulfilling—so they think—the great prophecy of the Six. But when faced with practicing their magic against Tselloch’s evil power, nothing turns out as expected.

Enchantments protect them as sorcery attacks them, and Colin Mackaby dogs their every step along the way. In the minds of the Alitheians, if Darcy cannot repair the breach that has formed between herself and Tellius, nothing will turn out as it was foretold. Darcy wonders, in the end, if there is any hope at all for her, or for Alitheia

Book blurb for The Scroll (Book 5):
Darcy Pennington may once have been an average teenager, but not anymore. Living each year twice, once in her world and once in Alitheia, has made her into someone who cares little for normal teenage activities. She’s got more important things to do, like save the mythical, magical world of Alitheia. But this time, Darcy can’t save Alitheia until she saves Tellius, the love of her life.

A window between the worlds allows Darcy to see Tellius from her home in Chicago. But, far from being reassured, she plunges into despair when she sees Tellius captured, imprisoned, and tortured. All her plans for her future life in Alitheia are put on hold as Darcy faces a singular goal: save Tellius, even if it means giving Tselloch something in return.

Intrigue is high upon her return to the castle, where old friends tell new lies, best friends hide crucial secrets, deceptive apparitions roam the halls, and betrayal lingers around every corner. The only way to unravel the mysteries and protect Alitheia is to bring Tellius home, but Darcy lacks the necessary magic for that.

As time runs low, Rubidius keeps to himself, and even Sam has her own secret this year. Darcy wonders if anyone else cares the way she does, and why it’s always a fight to get anything done. Still, she’ll do anything to rescue her future husband, including surrender herself to the fate she knows is coming anyway. Now, if only The Six could unveil the scroll, they might learn the greatest secret of all, before everything burns to ashes around them 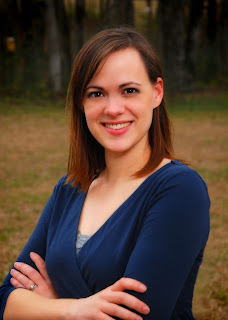 K. B. Hoyle is a wife to a wonderful husband, a mother to three rambunctious little boys, and has been a classical educator for five years. She always knew from a young age that she wanted to write stories that would inspire people. Her favorite genre to read and write is Young Adult Fantasy and Science Fiction, so that is where her journey began. K. B. Hoyle began writing her first fantasy novel at the age of eleven, which proved to be valuable experience and practice for the novels she would publish as an adult.