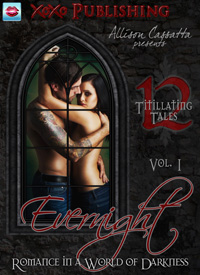 Abites, today on the blog we have two up and coming authors - Aaron Speca and Patricia Laffoon.

They are contributors to the Evernight anthologies and are about to launch their own new series - The Realmwalker Prophecy.

The first book is "Heart of the Mermaid". It is an adventure/romance set in what we know as the 18th century Caribbean. The two main characters are an ex-pirate (now conscripted into the Royal Navy) and a mermaid. There are also elements of fantasy and even a dash of sci fi as Atlantis plays a role in the second half of the book.

The series takes the idea of each book being about a different couple in the same world and flips it around. In this case, each book is about the same pair of souls that find each other in a different parallel realm with each volume. The overarching thread in the series is about a prophecy involving these two souls, a prophecy held by a race of "Realmwalkers" that live in a Realm above all the others and have the ability to move back and forth among them - some who want the prophecy to be fulfilled and some who don't. (In actuality, the Realmwalkers themselves do not even make an appearance in the first book, although they are alluded to.)


So without further ado - Hi Aaron and Patricia. Glad to have you both here today. Let's jump in.

What is The Realmwalker Prophecy?


Aaron: Well that is the million dollar question, and you jumped right to it! The Realmwalker Prophecy is the title of our book series in progress. We just completed the first book, Heart of the Mermaid, and it is in submission now. So what is the prophecy and who are the Realmwalkers? Those are spoilers, but the series involves parallel realms, and the souls and beings that move between them. The intent is that each book is a story within itself, but the nature of the Multiverse and the story of the prophecy binds the whole series together.

Tell us a little bit about how you two started working together. Is it true you met in a role playing game?


Patricia: Well it's not so much a game, as it is a group of like minded writers who enjoy the writings of Sherrilyn Kenyon and her series of Dark Hunter books. We stay close to the premise of her ideas of this world we live in with, shall we say, some creative license. Long story short, yes we met through this group. We chatted here and there and before you know it just as a lark we decided to have Rudy and Trish married in a future apocalyptic story line. We found we worked well together and when that SL was over we decided to give those characters a go as a very unusual couple....So far so good :D


Aaron: I'll be honest, I had no idea what I was getting into. We are very lucky to be a part of a large group of incredibly talented and creative people. Writing in this group sort of woke up a part of my brain that must have always been in there somewhere.


Did you set out to write a love story, or did it just turn out that way?


Aaron: As far as the book goes, yes. There are many versions of the two main characters (Rudy and Trish) in various settings, which is sort of where the idea for the series came from. But at first, the two characters were just friends. I know it may seem strange to talk about them as if they are real people, but that's sort of what they became.


Patricia: This was a no brainer Rudy and Trish were meant for each other from the start. 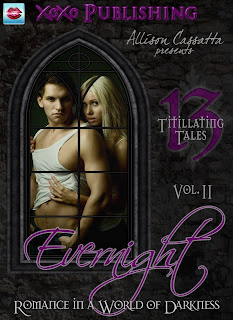 Why mermaids and pirates? (Cool concept by the way.)


Patricia: Well Trish was a mermaid to start off with and we had a member of our group Drake Kattakakis who was inspired to start a few group pages that would give us all a chance to break from writing our normal storylines in the Dark Hunter world and give us some room to grow as writers. One of the groups he made was Otherworlds: Pirates. Now as far as I was concerened this was custom made for Trish being a mermaid and all and before you know it Rudy and Trish were off on this grand adventure, which spawned two published short stories and evolved into the novel Heart of the Mermaid.


Aaron: We owe Drake for coming up with the idea of writing in that setting. I can reveal that it's not just mermaids and pirates, but sea monsters, gods, and even Atlantis!


Taking a page from James Lipton of In the Actor's Studio, just because I like his questions, would each of you please answer the following:

What is your favorite word?

Aaron: Ubiquitous ... because it's just a fun word to say


What is your least favorite word?

Patricia: Aluminum I can't say it or spell it with out help... (Aaron's note: It's true! I had to fix her spelling LOL)

Come to Australia where they change aluminum to aluminium. That extra i will throw you everytime! But I digress.


What turns you on?


What turns you off?


What sound or noise do you love?


What sound or noise do you hate?


What is your favorite curse word?


What profession other than your own would you like to attempt?

Patricia: I would love to have my own antique shop


If heaven exists, what would you like to hear God say when you arrive at the pearly gates?

Aaron: I know you aren't perfect, but come in anyway.

Patricia: Hope you brought your appetite, your granny's been waiting for you.


Last but not least, when and where can readers get their hands on Realmwalker Prophecy?


Aaron: Well, as we were answering these questions actually, we received an e-mail that our manuscript has been accepted for publication! We don't have a release date yet ... but, if readers want a preview, the anthologies with our two short stories, along with twenty-three others, are available on Amazon from XoXo Publishing. The easiest way to get to them is here on my Amazon page:


And please come follow us on Facebook and Twitter so you can here the breaking news about the release of The Realmwalker Prophecy: Heart of the Mermaid!


Finally, you can visit my blog ... every Friday I host Finding Fiction Friday, where I interview an author every week, much like A.B. does!


Patricia: I can't begin to tell you what an experience this has been. Never in a million years would I have thought that I would have had two stories E-book published, and now a novel sent forward and it's all thanks to this wonderful man here, Aaron who had the courage to sneak a short story past me to enter a contest.


Aaron: *blushes* Well if it weren't for Patricia and her character, there would be no story to tell. 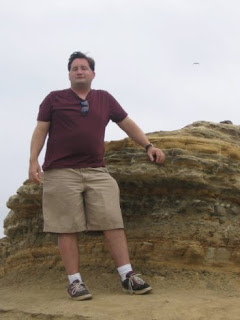 Rudy and Trish are the main characters in our two published short stories in the "Evernight: Romance in a World of Darkness" anthologies. You can get to know them as well as get 23 other great stories! Here's where you can find them:


About Aaron Speca:
I'm just a husband and father who has discovered, quite by accident, that he likes to write and isn't too bad at it. I started writing fan fiction in the paranormal romance area, and have written two published short stories with my partner Patricia Laffoon through XoXo Publishing. Now, I have a few works in progress and a bunch of ideas bouncing around in my head. If only life would slow down enough for me to get them down on paper!

Well Abites, what do you think? Are you intriqued by the Realwalker Prophecy?