Have you heard of The Valentich Disappearance? #ufo #alienabduction #amwriting While doing research about UFOs and alien abduction reports for Lifeboat, I came across an interesting real life story I had not before heard - The Valentich Disappearance.

On October 21, 1978, 20 year old pilot Frederick Valentich disappeared off the southern coast of Australia while flying over the Bass Straight. While it is not completely unheard of for a plane to disappear in flight - most are assumed crashed and usually some sort of wreckage is found. Sometimes no wreckage is found, especially if the disappearance occurred over water.

What makes the Valentich disappearance so unusual is what happened before the plane and pilot vanished.


In a conversation with Melbourne's air traffic control during the flight Valentich reported seeing a UFO. He described it doing all kinds of aeronautical acrobatics around his Cessna 182L.

During recordings made by Melbourne's air traffic control Valentich said:

"It seems to me that he's playing some sort of game. He's flying over me two, three times at a time at speeds I could not identify," 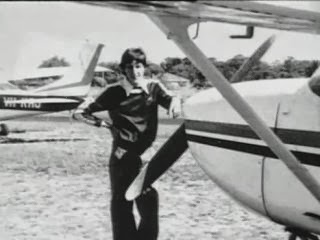 "What I am doing right now is orbiting and the thing is just orbiting on top of me also it has a green light and sort of metallic, it's all shiny (on) the outside."

And his final words - "It is hovering and it's not an aircraft."

These words were followed by a long metallic clanging sound. Those were the last known sounds ever made by Frederick Valentich and his plane.

There was some speculation that Valentich faked his own disappearance, or that he crashed, and then there was the wild speculation that he and his ship had been abducted by the very UFO he reported seeing. Others reported UFO sightings in that area around the same time, although those reports came after the announcement of the disappearance and have been primarily discounted by officials.

Want to know more about this case? Here are a few articles you can check out.

Abites, what do you think happened to Frederick Valentich?
Posted by A.B. Shepherd at 10:45 AM