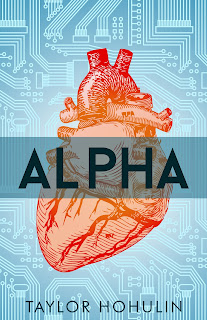 Today on the blog Abites, I am reviewing sci-fi novel Alpha by Taylor Hohulin.

I was provided a copy of this ebook in exchange for a fair and honest review.

My review:
At the end of Alpha, Taylor Hohulin says that Data from Star Trek Next Generation is his favorite robot. I suspect that would offend Data since he is an android, but that does explain the vibe of Alpha. While this is a sci-fi novel, with robots created for military warfare it is very light and irreverent in tone (even though violent).

It is even softer sci-fi than my own book, Lifeboat. At least I think so.

When I read, one of the things I enjoy about reading is that I can stop and think along the way. As I was reading Alpha I noted that a couple of very different movies came to mind. Alpha is really in no way like these movies and yet...

Ever see the movie Multiplicity with Michael Keaton? Michael Keaton has himself cloned and then the clone has HIMself cloned? A copy of a copy is never quite as good - remember? When you read Alpha, there is no cloning involved, but that movie came to mind for me when Beta and Gamma arrived. I don't want to give too much away here though, so no spoilers. Sorry.

Another movie that came to mind, believe it or not, was The Wizard of Oz and the "If I only had a..." song sung by the Cowardly Lion, the Tin Man and the Scarecrow.

Alpha was given a human heart in his robotic body in the hope that it would make him feel loyalty toward his allies in the anticipated military intervention of Earth's military in the Mars/Venus war. The sci-fi is so light we never learn where the heart comes from or how it is obtained, and yet there is some pretty dark subject matter as well lightness and humor here in this book .

Do you enjoy books that provide you light entertainment without shaking the Earth? Or do you prefer books that rock your world hard? A combo of both?
You can get Alpha at Amazon, Barnes and Noble, and Smashwords.

Synopsis:
Alpha is the world’s first robotic soldier, but he would rather woo his mechanic than wage war. This probably has something to do with his human heart, given to him in hopes that it would prevent him from enslaving the entire human race.

Once the greatest soldier the Planet Earth Military Forces had seen, Meat can’t help but think this new age of robotic soldiers will leave people like him in the dust. Forced into retirement, he has nothing left to do but stew in his bitterness toward the organization he once loved.

Lucas Sharpe wishes he’d managed to work his way to CEO of the Planet Earth Military Forces before its leaders traded their plasma rifles for stacks of paperwork. Now he’s just bored.

Alpha is having enough trouble winning his mechanic’s heart - as it turns out, robots aren't her type - but when Meat begins to stalk Alpha’s inventor, Lucas sees a chance to return to action, even if it means breaking a few rules. Unfortunately, Lucas’s involvement only makes Meat angrier, and before long, the ex-soldier’s obsession escalates into all-out suburban warfare. Everything Alpha loves is threatened, and it becomes clear he will have to fight. And he would fight - he really would - if not for an unfortunate, deadly malfunction that should come as no surprise to anyone who knows his inventor is the worst Military scientist of all time.

About the author:
Taylor Hohulin is a DJ at a Christian rock radio station in Dallas, Texas. He lives in Arlington with his wife, two cats, and a dog. He wrote Alpha as a novel after realizing that it wasn't such a good idea for a Ke$ha/Depeche Mode-influenced concept album after all.