Interview & giveaway with Timothy Burns, author of Ghosts of the Void #giveaway #interview 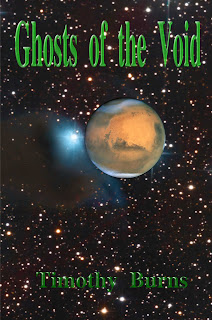 Abites, you asked for it and I deliver. You want more giveaways and you want more author interviews. Well here is two in one.
Today I am privileged to have on the blog, author Tim Burns whose book Ghosts of the Void is a hard sci-fi thriller. He has generously offered to give 6 lucky winners a copy of this exciting new book. Be sure to enter the rafflecopter for your chance to win.

Ghosts of the Void is the second science-fiction novel by Timothy Burns.
You can get this 296-page (105k words) paperback for $9.99 from CreateSpace.
You can get the ebook for $1.49 from Amazon.

Add it to your Goodreads list now.
Tim, thanks for stopping by today to talk to me (and the lovely Abites). Ready for some hard-hitting (okay, maybe not so hard, but ones I want to know the answers too) questions?

You write hard sci-fi? Why do you prefer hard over soft?
I've always been very interested in high technology and science, so I suppose it's just natural that my writing would reflect that.

What inspired Ghosts of the Void?
This book is actually a combination of several ideas I've had bouncing around in my head for some time, but what really solidified it was when I was reading an article on dark matter and just how much we don't know about it.

Do you think humans will ever make it to Mars?
With the human drive for exploration and adventure, I would be more surprised if we don't ever make it.

Do you think aliens exist, and if so are they visiting Earth?
In all the vastness of space and time I feel that surely other life has gained sentience, but whether they are capable or interested in visiting us, I don't know. I think that if they had, though, we would surely know about it in unmistakable terms.

Do you believe there truly are psionically gifted humans?
I do. The human mind is capable of so much more that most people believe, and I have heard of and even personally experienced things that must be what some call psionic powers.

Who inspired your love of reading?
I grew up surrounded by readers and full bookshelves, so I cannot say that any one individual was responsible for my love of the written word.

Who has influenced your writing the most (other than yourself of course)?
I would have to say Isaac Asimov. I love the way he blended hard science with human motivations and desires.

And now, because I love the questions, I will emulate James Lipton from Inside The Actor's Studio - What is your favorite word?
That would have to be "grok", which comes from my other literary hero, Robert Heinlein. To grok something is to know it on the deepest, fullest level possible.

What is your least favorite word?
That's simple: "impossible". I feel that most people use it way too much. Just because something is highly improbable does not mean that it absoultely cannot happen.

What turns you on?
A stimulating philosophical conversation.

What turns you off?
People who refuse to believe what is plainly obvious.

What sound or noise do you love?
A cat's purr. Absolutely wonderful.

What sound or noise do you hate?
The alarm clock.

What profession other than your own would you like to attempt?
Astronaut. I would love to explore other worlds.

What profession would you not like to do?
Policeman. I just could never bring myself to intrude into other people's lives and try to force them to uphold all the pointless laws made by control freaks.

Is there anything else you'd like your readers to know?
I am currently working on another science-fiction adventure, to be called "Wyrd of the Phoenix". Without giving too much away, I'll say that psionics plays a major role in this book, too.
a Rafflecopter giveaway

Ghosts in the Void Blurb:
When the solar system passes through a vast cloud of dark matter, strange things start to happen. Electronics go haywire, unbreakable materials suddenly break, and enigmatic, ghostly creatures are sighted. To the inhabitants of Earth this is bad enough, but on Mars, where properly-functioning technology means the difference between life and death, this spells disaster on an unimaginable scale.

Jared Miller, a psionically talented problem solver, barely survives his journey to the Red Planet on his mission to discover just what these mysterious ghosts of the void are and what they want. There, he meets Bo Greene, a prospector who scours the barren wasteland in his six-legged walker in search of mroom, the only life native to Mars. Along with Bo's ex-wife Anissa, their teenaged daughter Debbie, Anna the witch and several others, Jared and Bo find themselves transported to the distant future where Mars is green and vibrant but the inhabitants are under the domination of alien overlords and their sadistic psionic henchmen.

Survival becomes their primary goal as they seek to save two worlds, but in the end they face the terrible dilemma of having to choose which to save and which to condemn to non-existence.
Although not required, Tim hopes if you win that you will leave a review of Ghosts of the Void. This looks like a great book and it is definitely going on my "to-read" list. How about you, Abites?
About the Tim Burns:
Mr. Burns is a computer technician and self-published novelist whose primary interest is hard science-fiction. He has read and loved that genre all his life and has always dreamed of writing books that others would enjoy reading as much as he himself enjoyed those of the great S/F masters. He is very interested in high technology and tries to impart accuracy and plausibility into his work. Other reading and writing interests include fantasy, magic, the paranormal, the Norse runes and nature-centered religions. His premier novel was "Outside of Space" and is followed by "Ghosts of the Void" and he is currently working on his next book. He lives in northern Mississippi.
Connect with Tim Burns on Facebook: http://www.facebook.com/TyrBerBooks