My review:
Awhile back I reviewed Whole Lotta Trouble by Stephanie Bond. I liked it, but it had room for improvement. I have to say, Stephanie is getting better.

This review is for Party Crashers (Body Movers 0.5).

Can you call a murder mystery cute and cuddly? Seems like an oxymoron, but I think you can. I just did. ;)

If you like light murder mysteries, you'll love Party Crashers. Jolie is a character I think most of us can relate to. She's well developed, down to earth, and not annoying like so many humorous chick lit heroines can be. She's trying to solve the mystery of her casual boyfriend's disappearance and finds herself in a situation that is way over her head, and in the meantime she meets a hunky and wealthy hero that she's not quite sure she can trust.

It's formulaic, but it's a good formula. One that will work time and again. A very enjoyable, light read.

Do you like humorous, romantic mysteries? What are your favorites?
Want to read Party Crashers? You can pick it up at Amazon.


Book blurb:
Jolie Goodman never yearned for a life in Atlanta's fast lane. All she wants is a career in real estate, and she's willing to sell shoes in Neiman Marcus over the holidays to make ends meet. But recently, her boyfriend vanished -- with her car -- and her search for answers leads her to some very exclusive circles. Jolie hooks up with a pair of retail fashionistas who have made crashing society bashes an art form, and soon findsherself rubbing shoulders with the rich and famous ... and rubbing other body parts with one of Atlanta's most eligible bachelors!

But Jolie can't shake the feeling that she's being pursued ... right into a dangerous clique where friends and enemies look the same, and flirtation is the preferred party favor. Jolie and her gal pals become the toast of the town ... until a body turns up at a sexy soiree the women have crashed. The fun and games come to a dead end when the "crashers" are fingered for the murder. The women have to pull all the tricks out of their designer bags to try to trap a stalker before Jolie, once the life of the party, becomes the death of the party.( 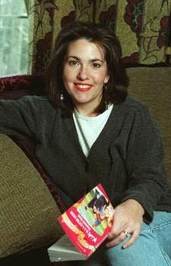 Stephanie Bond grew up in the small town of Olive Hill, eastern Kentucky, on a tobacco farm with one brother and one sister. She attended Morehead State University on an academic scholarship and studied computer programming. During these years, she bought a shoe store, and she ran the business with the help of her mother. She graduated MSU in 1987, she sold her retail business and started to work in a Fortune 100 petroleum company. She was seven years deep into a computer career and pursuing a master’s degree at night when an instructor remarked she had a flair for writing and encouraged her to submit to academic journals.

Once the seed was planted, however, she immediately turned to creating romance fiction in her spare time. "I never saw myself as a comedy writer, until a Harlequin editor asked if I could write comedy. I lied and said not only did I write comedy, but I had a great idea for a book she might be interested in, and shot her an idea from the top of my head. When she said she liked it, I told her I had three chapters finished to send her right away. Then I went home and wrote like a madwoman. That book was my first Harlequin comedy, Irresistible." Harlequin purchased Irresistible from Stephanie in the fall of 1995 for their Love and Laughter line. In another two years, she left her computer career to write full-time. As Stephanie Bond and Stephanie Bancroft, she has written over 60 novels for different publishers. She is best known for writing steamy books that make readers laugh out loud.

Stephanie lives with her husband, Christopher Hauck, in Atlanta, Georgia, her laptop permanently attached to her body. Readers can write her at P.O. Box 54266, Atlanta, GA 30308, or through her web site: www.stephaniebond.com
Posted by A.B. Shepherd at 11:35 AM