My review of 1984 by George Orwell #bookreview 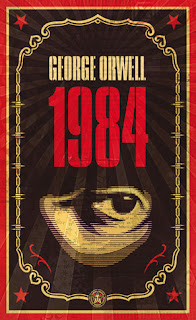 G'day Abites. How ya' goin'? That's Aussie for hi, how are you.  I think I've mentioned before that I haven't read much in the way of classic literature. As a kid I thought, if they made you read it in school it must be boring. Sometimes when I've read classics as an adult I decide I was right as a kid, and sometimes not.

My review:
1984 is one of those books that many high schools have on their curriculum, but it is one I wasn't forced to read, so I didn't. Until now.

I have to say, that it has left me a bit conflicted. I'm not a fan of Orwell's writing style. He drags on and on repetitively, and it is about 95% narration. His description of people and things don't gel with me. Everything is ugly in this book, with only one or two minor exceptions. (I'm sure that is intentional, but doesn't make for a pleasant reading experience.)


In the beginning I empathized with Winston, but not for long. I didn't feel the love Winston had for Julia, even though we were told he felt it. But then again this book was written in 1948 and I often have trouble with the way love stories were written in the classics. I could, however, feel his fear, his hopelessness, and his sense of being trapped.

In many ways this book does deserve to BE a classic. It was way ahead of it's time in some regards, especially the way it describes Big Brother and technology. Although written in 1948, it is set in London in 1984 at a time when there are only three mega-countries left, and war is continuous (although who you are warring with changes).

Big Brother is the figurehead of The Party which rules Oceana, one of the three mega-countries of which London is part. The Party's slogans are:


WAR IS PEACE
FREEDOM IS SLAVERY
IGNORANCE IS STRENGTH

How chilling is that? Especially Ignorance is Strength. That is terrifyingly true. If you keep people ignorant YOU have all the power, and power is a key element in this story.

As for the technology, they have telescreens (I'm guessing they would look a lot like today's flat screen TVs) everywhere, but in Oceana you aren't just watching the screens, they are watching you back, monitoring your every move, every word, and every sound you make. Even the expression on your face. Pretty alarming, right?

And worse yet, you can be convicted of a thought crime. You don't even have to have done anything, except think.

Poverty is rampant and deliberate. Children are taught to turn on their parents. Hate is a requirement to live. The past is constantly changing. And in the blink of an eye, your very existence can be erased.

In light of the technology of today, and the NSA, FBI, and CIA surveillance of the internet and telephone usage of Americans (yes, other countries do this to I'm sure, you just don't hear about it as much) some of Orwell's imagined future is spot on, which is why much of his terminology is common usage today, especially the term Big Brother, and why "Orwellian" has come to describe a state in which governments have too much control.

I didn't love this book. Parts of it I hated. But I do think that it is a cautionary tale, and should be mandatory reading for just about every person in the world over the age of sixteen. We can't let Orwell's imagined future become reality. We are already half way there and we are far too complacent about it. Don't let Big Brother win.

Do you worry about Big Brother? How close to you think we have come to Orwell's 1984 becoming reality? What do you think we can do to stop it?


Book Blurb:
Written in 1948, 1984 was George Orwell's chilling prophecy about the future.

'It was a bright cold day in April, and the clocks were striking thirteen.'

Winston Smith works for the Ministry of truth in London, chief city of Airstrip One. Big Brother stares out from every poster, the Thought Police uncover every act of betrayal. When Winston finds love with Julia, he discovers that life does not have to be dull and deadening, and awakens to new possibilities. Despite the police helicopters that hover and circle overhead, Winston and Julia begin to question the Party; they are drawn towards conspiracy. Yet Big Brother will not tolerate dissent - even in the mind. For those with original thoughts they invented Room 101 . . .

Ninteen Eighty-Four is George Orwell's terrifying vision of a totalitarian future in which everything and everyone is slave to a tyrannical regime. 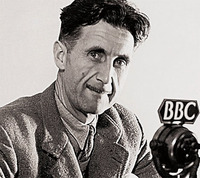 Eric Arthur Blair, better known by his pen name George Orwell, was an English author and journalist. His work is marked by keen intelligence and wit, a profound awareness of social injustice, an intense opposition to totalitarianism, a passion for clarity in language, and a belief in democratic socialism.

Considered perhaps the twentieth century's best chronicler of English culture, Orwell wrote fiction, polemical journalism, literary criticism and poetry. He is best known for the dystopian novel "Nineteen Eighty-Four" (published in 1949) and the satirical novella "Animal Farm" (1945)—they have together sold more copies than any two books by any other twentieth-century author. His 1938 book "Homage to Catalonia", an account of his experiences as a volunteer on the Republican side during the Spanish Civil War, together with numerous essays on politics, literature, language, and culture, are widely acclaimed.

Orwell's influence on contemporary culture, popular and political, continues decades after his death. Several of his neologisms, along with the term "Orwellian" — now a byword for any oppressive or manipulative social phenomenon opposed to a free society — have entered the vernacular.
Posted by A.B. Shepherd at 9:00 AM