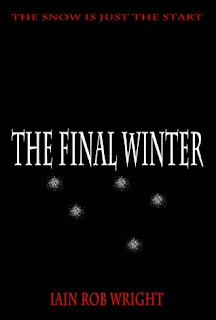 Book Blurb:
On the night where it begins snowing in every country of the world, a group of ordinary people gather at an old English pub. At first they assume the weather is just a random occurrence, but as the night goes on, and weird things happen, they start to realize something far more sinister is occurring.

And that someone amongst them may be the cause of it all.

By the end of the night, not everyone will make it, and those that do may wish they hadn’t.

My review:
This is a tough book for me to review. I'm not a huge fan of horror but every once in awhile I like to read a little scary book here and there.

This did have a Stephen King-esque type feel to it, but I was a bit let down by the story itself. Not that it is a bad story. The story is fine, but I kind of feel like it was a bit of a bait and switch. I was looking to read a horror tale about the end of the world, and instead I feel like I got a book about morality and religion. Not that morality and religion can't play a role in a horror tale, and often do. I don't know. I'm confusing myself, and probably you too. And honestly, when the sub-title is "An Apocalyptic Horror Novel" well I guess religion and morality should be a given as far as themes go, so I think maybe I'm the problem.

There were a couple of nice quirky twists to the morality tale with regard to the character of Lucas, but overall - well, I'm not a religious person and I don't like reading Christian fiction. While this isn't your typical Christian fiction I was left feeling that Christian Fiction, or maybe even the book of Revelation from the bible, was exactly what I'd read.

Someone, please read this book and tell me if you feel the same way, or if you really got the horror vibe it was intended to give. 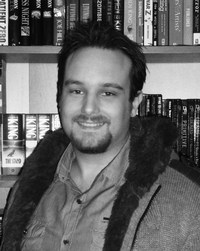 About the author:
Iain Rob Wright was born in 1984 and lives in Redditch, a small town in the West Midlands, UK, with his cocker spaniels, Daisy and Oscar, his fat old cat, Jess, his many tropical fish, and the love of his life, Sally. Writing is the passion that fills his life during the small periods of time when he isn't cleaning up after his pets.

Horror is his beloved genre and his next gruesome novel, Animal Kingdom, will be released later this year. His inspirations range from Brian Keene, Stephen King, and Richard Laymon, to J A Konrath and Terry Pratchett.

If you read his work then please leave a review. Every one helps!

You can speak to him at: iain.robert.wright@hotmail.co.uk

or read his regular blog at:http://iainrobwright.blogspot.com/

His official website is: http://iainrobwright.com
Posted by A.B. Shepherd at 5:15 PM