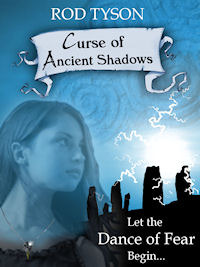 Cat Celeste has no idea of the dark events surrounding her family’s ancient history. Her mum and dad tried to protect her by moving to London shortly after she was born. Thirteen years later, the family curse has followed them, and her parents have disappeared in strange circumstances.

Now, with the help of her estranged grand-father Phillip, and her best friend Hetty, she must fight for her life to discover the bizarre truth, in a supernatural struggle that is a legacy of her ancient ancestors’ fallen kingdom.

Time is short. There can be only one winner in the deadly game.

The Dance of Fear has begun.

A novel for 10 to 13 year olds and adults who love adventure, fairy tales and fantasy.

My review:
Parts of this book were really well written.

I have to say though, that there were some things that seemed odd. The children in the book didn't seem like normal children. There were no giggles or sounds of disgust when Ben picked his nose or someone farted. They just seemed to accepted that really strange creatures and weird things were happening without finding it really weird or scary.

One thing that bugged me a bit was that every mechanical vehicle in this novel belches black smoke. Motor cycle, van, moped - every single one.

Another thing I found really odd as a parent (even though my kids are grown) is that Hetty's parents shipped her off to stay with Cat in a strange place which was not Cat's home without ever even speaking to an adult.

And lastly in the way of criticism, the ending when Cat was trying to rescue her parents made no sense to me at all.

Now for the things I did like:
There were lots of fantasy elements. This is an epic adventure and there is lots of action. And you know what? Maybe for some of you those things I am nitpicking about won't make a whit of difference. They might even add to your enjoyment.

What are your favorite fantasy books for kids aged 10 to 13? 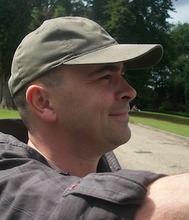 Rod Tyson is an aspiring author of young adult fantasy and horror novels as well as a sculptor, computer geek, road warrior, mega-dad, father of a notorious ninja and ex new-age traveller. Living in rural Suffolk, UK with his wife, daughter and a nameless moggy, when he’s not repairing computers or seeking inspiration while hiking out in the countryside he’s writing novels.

He has just released his second novel – The Orphan Stone, a young adult dark fantasy.

Check out his blog – www.rodtysonblog.blogspot.com
www.ancientshadows.co.uk
Posted by A.B. Shepherd at 8:00 AM