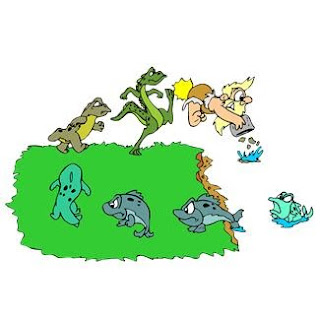 
I laughed so hard I nearly wet my pants.

Honestly. This show is so full of wild ideas and while some of them have a shred of validity and do make me ponder possibilities, many others border on the ridiculous and absurd.

The Theorists speculated that because our technology is reaching the point where such medical feats could be possible, we are merely recreating lost technology now.  The aliens who would have reached our world so long ago would have had that technology and used it. What would be more natural than to experiment with Earthly animal life?

One of the other theories mentioned in this episode was the theory that humans only evolved from primates due to the genetic intervention from aliens who visited our planet so many years ago. Centaurs would have been the perfect pack animals with the brains of man so they could understand directions. The Theorists even speculated that dragons were created by aliens from lizards - why not give them wings and the ability to breath fire?

While I find much of this show to be complete hocum, I have to admit that it sparks my imagination in ways that I might someday find useful in my writing and that is precisely why I enjoy it.

Do you watch this kind of thing? What sparks your imagination? What makes you think?
Posted by A.B. Shepherd at 8:59 AM