Book Review of The Other Side: Melinda's Story by Starr Gardinier Reina 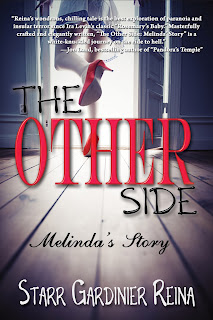 Book Blurb:
Melinda James’ father is dead. But he tries to warn her from the ‘Other Side’ that the killers from the past want something only Melinda can give them. And they are beginning to get far too close for comfort. Can dead people protect the living? And if they can, will it be enough? And does this ‘Other Side’ really exist or is this all in Melinda’s mind?

In her world, as portals open and close, Melinda must find a way to understand that the voices speaking are sending dire warnings. She is out of time. They are here, desperate to take what they feel is theirs and they will stop at nothing to get it.


My review:
I was given an ebook version of this novel in exchange for an honest review.

I was intrigued by this story. Melinda James has been in a mental institution since she was 14 years old. Now, a young adult she's hoping to get out if her new therapist can certify her as not a danger to herself or others.

For some reason the idea of a person who may, or may not, be insane is fascinating to me. Is Melinda really hearing her Dad from the other side? Or is she delusional?

For me, this book had a few flaws - it was a little confusing at first flipping between Melinda's voice and her Dad's voice, and there is some issue with present versus past tense when Melinda is telling her story.

But those issues aren't huge and overall this was a very imaginative and enjoyable YA paranormal story. Some YA stories don't feel particularly YA and are only rated YA because the lead characters are teenagers or young adults. This is a true YA story, with a YA feel. I would recommend it for teens.

About the author:
A paralegal by day, she’s an author by night. Apart from being an award winning author for her short story "Cut", Reina has appeared in a blaze and made her mark on the literary world with her Ivanovich Series. The
first is “In the Name of Revenge”, the second, “Deadly Decisions” and the third, "One Major Mistake" was released July 10, 2012. Having studied and obtained her Bachelor’s Degree in Literature/Creative
Writing, she has found her unique style and is known for her works' distinctive voice, making every character stand out. 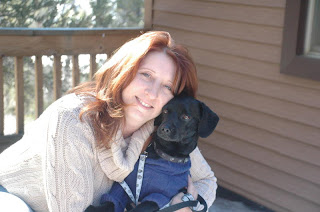 Reina is the artistic creator of the Ivanovich series featuring Pavel Ivanovich. Flanking Ivanovich's side in "Deadly Decisions" is Teresa Mancini, who vies with Ivanovich for readers' attention. According to
J.M. LeDuc, who was "raised in an Italian family", Teresa "is perfect...like all your characters". Reina is also the author of young adult novella "Cruel Whispers" and its sequel novel "Cruel Past".
Reina is an executive editor for Suspense Magazine. She has been interviewed in the newspaper and on the radio with relation to her fiction work. She has been a co-host on Suspense Radio.
Reina is a member of International Thriller Writers (ITW) and of Sisters in Crime, Los Angeles Chapter and nationally. She has won three Best Speaker awards as well as Best Evaluator at the Voice Ambassadors
chapter of Toastmasters. She has always been active in events. As co-chair and main coordinator for the West Coast Author Premiere, she arranged the weekend-long event to help authors from all over network,
learn and share their work with the public. Reina has also been instrumental in compiling authors and planning a local author event at Barnes and Noble in Ventura, California along with the store’s event manager.
Please read more about Starr at www.QueenWriter.com or visit her blog at www.qw-blog.blogspot.com.
You can also connect with Star via the following social media links:
www.facebook.com/starr.reina
www.facebook.com/Starr-Gardinier-Reina (author page)
www.twitter.com/SGReina
www.qw-blog.blogspot.com
www.QueenWriter.com
Posted by A.B. Shepherd at 12:22 PM