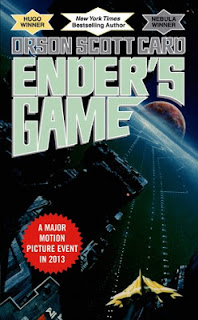 Book Blurb:
In order to develop a secure defense against a hostile alien race's next attack, government agencies breed child geniuses and train them as soldiers. A brilliant young boy, Andrew "Ender" Wiggin lives with his kind but distant parents, his sadistic brother Peter, and the person he loves more than anyone else, his sister Valentine. Peter and Valentine were candidates for the soldier-training program but didn't make the cut—young Ender is the Wiggin drafted to the orbiting Battle School for rigorous military training.

Ender's skills make him a leader in school and respected in the Battle Room, where children play at mock battles in zero gravity. Yet growing up in an artificial community of young soldiers Ender suffers greatly from isolation, rivalry from his peers, pressure from the adult teachers, and an unsettling fear of the alien invaders. His psychological battles include loneliness, fear that he is becoming like the cruel brother he remembers, and fanning the flames of devotion to his beloved sister.

Is Ender the general Earth needs? But Ender is not the only result of the genetic experiments. The war with the Buggers has been raging for a hundred years, and the quest for the perfect general has been underway for almost as long. Ender's two older siblings are every bit as unusual as he is, but in very different ways. Between the three of them lie the abilities to remake a world. If, that is, the world survives.
Ender's Game is the winner of the 1985 Nebula Award for Best Novel and the 1986 Hugo Award for Best Novel.

My review:
Ender's Game is not as old as The Chrysallids, but it is another classic science fiction novel that I hadn't read until - well - now.

I can honestly say that this isn't my typical type of book. It's about a genius little boy who is trained to lead in battle, and much of it is about war or war games. There is bullying. There is a lot of talk of battle strategy. Many of the things that I really don't like to read about.

Oddly, I loved it. I credit that solely to Orson Scott Card. I was sucked into the book from the beginning and stayed up until 4 am reading the first half, only going to sleep when my eyes could no longer focus (for the record I often will read a chapter or two before I go to sleep - I didn't start reading this one until 1:30 am.)

Although he speaks and thinks much older than his wee years, Ender is such a fabulous lead character than you just really want to know what happens to him. Through all of his struggles you cheer him on, willing him not to give up. He's betrayed every time he turns around and still he goes on.

This is just such a great book that I cannot praise it enough without spoiling it for you. It is worthy of the awards and acclaim it has received.


If you haven't read it, read it. If you've read it, please tell me what you think. Do you agree with me? 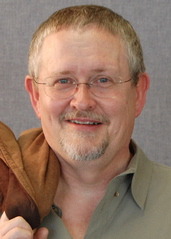 Orson Scott Card is the author of the novels Ender's Game, Ender's Shadow, and Speaker for the Dead, which are widely read by adults and younger readers, and are increasingly used in schools.
Besides these and other science fiction novels, Card writes contemporary fantasy (Magic Street, Enchantment, Lost Boys), biblical novels (Stone Tables, Rachel and Leah), the American frontier fantasy series The Tales of Alvin Maker (beginning with Seventh Son), poetry (An Open Book), and many plays and scripts.

Card was born in Washington and grew up in California, Arizona, and Utah. He served a mission for the LDS Church in Brazil in the early 1970s. Besides his writing, he teaches occasional classes and workshops and directs plays. He recently began a longterm position as a professor of writing and literature at Southern Virginia University.

For further details, see the author's Wikipedia page.
For an ordered list of the author's works, see Wikipedia's List of works by Orson Scott Card.
Posted by A.B. Shepherd at 11:00 AM