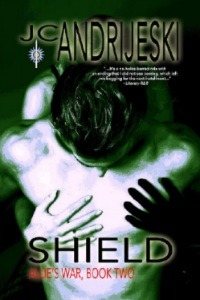 Book Blurb:
Grappling with her identity as "Bridge," a being thought to herald the end of humanity, isn't even Allie's biggest problem. She's also dealing with being married to a seer while trying to stop the Rook she put in the White House from starting a war. Then the boy appears. A highly dangerous telekinetic seer, he doesn't appear to have aged in over 100 years. Worse, he thinks Allie belongs to him.

My review:
It's been over a year since I read the first book in this series - you can check out that review here. Shield is the sequel to Rook, both in the Allie's War series. It is a complicated, sophisticated, continuance of the story of Allie, a seer who was raised as human, and her seer husband, Revik. While I found it
frustrating that Allie and Revik just cannot seem to get together, it does make for great reading and there are at least four more books in this series, so it could happen yet. I don't want to give any spoilers, but I will say the suspense continues throughout and there is so much more to the story that I want to know. I need to know what happens. It is a war story, so there is violence but nothing that you wouldn't expect in a story of war. Well done J.C. 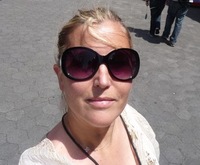 I've published novels, short stories and nonfiction articles and essays, as well as an illustrated children's story in an anthology. I've also produced a graphic novel version of my Bridge series books, entitled Rook, and written a number of screenplays for short films and done other odd and end film type stuff. My main focus right now is writing novels however, including several middle grades and continuing the "Allie's War" series of books. I'm also doing the occasional short piece for anthologies and other venues, and writing essays when I can find the time.