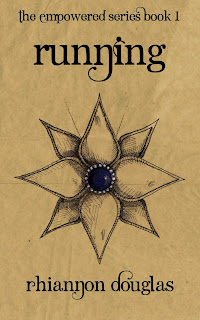 Book Blurb:
She will be hunted. She will be found. The Empire will never be the same.

My review:
I interviewed Rhiannon recently about Running. You can read that review here.

I was privileged to receive an ARC of this novel. Running is the first in a series of at least three books called The Empowered Series. It tells the story of Gwen, a young woman who leads an ordinary life, in an ordinary town, until one day a Rogue Empowered comes looking for her. Then she has no choice but to run. Rhiannon Douglas has all the elements of a fantastic fantasy best seller here. Her characters are well developed and we want to KNOW them. She teases us with tid bits of what is to come. She makes us NEED to read more. There are no dragons or witches here, but there is magic and power. I don't want to spoil it for you, but my favorite scene is near the end in the caves. You have to read this for yourself. If you are a fan of epic fantasy novels you will LOVE Running!

About the author:
Rhiannon Douglas lives in South Australia with her partner Joseph and her cat Silver. She spends her time writing fantasy, playing with her cat and loitering in the vegetable garden while Joseph does all of the work.