The Perk by Mark Gimenez

Book Blurb:
Beck Hardin, a high-profile Chicago trial lawyer, loses his wife to breast cancer and is left alone to raise their two young children. But he's been a full-time lawyer and a part-time father, so their lives soon fall apart. To save his children, he returns to his small hometown in the Texas Hill Country, reunites with his estranged father (a goat rancher turned winemaker), and soon becomes the local judge. He finds himself trying to pay off an old debt by solving the cold case murder of his high school buddy's teenage daughter—and discovers that a small-town judge's life isn't such a simple life.


My review:
I read this book because it came highly recommended by a friend. She really enjoyed it. Me - not so much. I will say that has much more to do with my personal preferences though, than with the book itself. Based on the blurb this seemed right up my alley. A mystery. A story with heart.

That IS a part of the story. But there is much more to it. Here is what I don't like.

*************SPOILER ALERT*************
Beck becomes the judge in his small home town and therein lies the problem for me. Politics. I hate stories of politics and abuse of power. I hate stories where the little guy is bullied, no matter how it turns out in the end. I hate people who are always out to prove how much smarter they are by screwing over someone else.

Yup. That is my big problem with this book. It contains all those elements that I really hate. For some people those are great story elements and really make a book something that grabs their emotions and therefore they enjoy it more. Not me. Hate it.

The story was good, just not for me.

Oh! And a couple of other things. A lot of people love books that are really descriptive, but for me this one has a little too much description of things that aren't relevant to the story.

And BIG SPOILER ALERT here. I had a problem with the fact that Slade - who would have been 14 at the time of Heidi's death five years ago, not only fathered the baby she aborted when she was 16 (what 16 year old girl who wants to be a star is banging a 14 year old???), but also was injecting steroids through which he contracted AIDS that he passed on to her and she passed on to Chase when Slade was still only 14 - or younger. 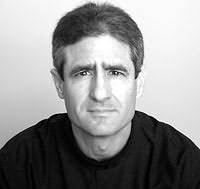 The earlier parts of the book don't indicate Slade started his steroid routine that young. AND if he HAD he would have contracted the HIV virus - not AIDS and THAT is what he would have passed on. Although the HIV virus can develop into AIDS it doesn't always and the two are very separate things.

So there you go. My humble opinion and the reasons why this book didn't quite do it for me. Have you read it? What do you think?

About the author:
Mark Gimenez left a major Dallas law firm in order to start his own solo practice and to write. He lives in Texas with his wife and two sons.

You can learn more about Mark by checking out his website.