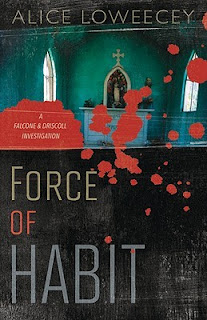 Giulia Falcone is convinced she's going to Hell. First, because she left the convent. Second, her new job with a private investigator has her sneaking around and lying. Adjusting to life in the outside world isn't easy. Makeup, dating, and sex are all new to her. And despite a crush on her boss Frank Driscoll--a foul-mouthed, soft-hearted ex-cop--Giulia is sure he'd never fall for an ex-nun.

Her first case involves drop-dead handsome Blake Parker, a man with immense wealth and an ego to match. He and his fiancee are getting disturbing "gifts" with messages based on biblical verses. When Giulia is drawn into the stalker's twisted game, salacious photos of her appear, threatening her job and her friendship with Frank. No one imagines--least of all naive Giulia--the danger ahead, when following the clues turns into a fight for her life.

Book one in the dangerously habit-forming Falcone & Driscoll Investigation series.


My review:
Most people don't know this about me, but when I was a young teenager I wanted to convert to Catholicism and for a brief period thought I'd like to be a Nun. The idea of being a Nun is still a bit fascinating to me. So when I read that this book was about a former Nun - and was written by a former Nun - I had to read it!

Of course this is not a memoir. It is fiction and a mystery so it doesn't give us a complete look at the life of a former Nun, but it does give us a glimpse of what it would be like to leave the Nunnery as a 30 something virgin trying to adjust to the real world.

Add in the mix of mystery, a little humor, a lot of danger, a hint of romance and a few quirky characters and you've got an enjoyable novel worth reading. 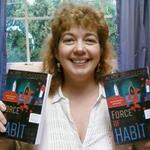 Alice Loweecey is a former nun who went from the convent to playing prostitutes on stage to accepting her husband’s marriage proposal on the second date. Her teenage sons clamor for dramatic cameos in future books, but she’s thinking they’ll make good Redshirts.

She is a member of Mystery Writers of America and Sisters in Crime. The author lives with her family in Western New York. Force of Habit is her first novel.

To learn more about Alice check out her website.