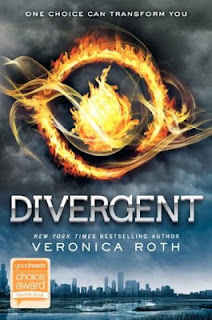 Book Blurb:
In Beatrice Prior's dystopian Chicago world, society is divided into five factions, each dedicated to the cultivation of a particular virtue--Candor (the honest), Abnegation (the selfless), Dauntless (the brave), Amity (the peaceful), and Erudite (the intelligent). On an appointed day of every year, all sixteen-year-olds must select the faction to which they will devote the rest of their lives. For Beatrice, the decision is between staying with her family and being who she really is--she can't have both. So she makes a choice that surprises everyone, including herself.

During the highly competitive initiation that follows, Beatrice renames herself Tris and struggles alongside her fellow initiates to live out the choice they have made.
Together they must undergo extreme physical tests of endurance and intense psychological simulations, some with devastating consequences. As initiation transforms them all, Tris must determine who her friends really are--and where, exactly, a romance with a sometimes fascinating, sometimes exasperating boy fits into the life she's chosen. But Tris also has a secret, one she's kept hidden from everyone because she's been warned it can mean death. And as she discovers unrest and growing conflict that threaten to unravel her seemingly perfect society, she also learns that her secret might help her save those she loves . . . or it might destroy her.


My review:
This is the first book I've read in some time that I would rate 5 stars. I loved it. It knocked my socks off! I was engrossed from the first page.

Tris is a sixteen year old girl living in a world where society has been divided into five separate factions that each have responsibilities to keep the world running. At age sixteen you decide which faction you will join. To become factionless is to become lost.

Tris must decide whether to remain part of the Abnegation faction where she was raised to be selfless or to choose to buck convention and join one of the other factions, and this is where we come in. But there is more to this than meets the eye. Something is happening that isn't right and when Tris stumbles onto it she needs to try to save her world.

Although not a similar story at all this book has a similar feel to The Hunger Games trilogy. If you loved that series you will love this. I sure did. 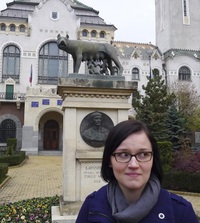 Veronica Roth is from a Chicago suburb. She studied creative writing at Northwestern University, and wrote DIVERGENT (Katherine Tegen Books, May 2011) and INSURGENT (May 2012). The third and final book in The Divergent Trilogy, which doesn't have a title yet, will come out in Fall 2013. In the meantime she will spend endless hours browsing Wikipedia in her pajamas as she eats corn flakes. (Or some other kind of bland breakfast cereal.)