The Alphabet Sisters by Monica McInerney 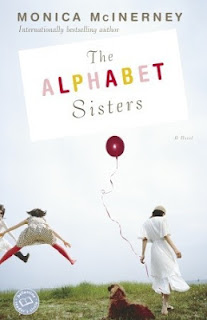 Book Blurb:
As girls growing up in Clare Valley, Australia, Anna, Bett, and Carrie Quinlan were childhood singing stars known as The Alphabet Sisters. The unbridled enthusiasm of their flamboyant grandmother Lola was the glue that held them together. As adults, though, the women haven’t spoken in years–ever since Bett’s fiancé deserted her to marry the younger Carrie. Now Lola is turning eighty and she is determined to reunite the girls for a blowout bash. And no one ever says no to Lola.

Bett, who fled to London after the scandal of losing her fiancé, is hesitant to face her sisters and her hometown–especially since she has yet to find another man. Sophisticated Anna, the eldest sister, isn’t too keen on the prospect either, though she’s secretly grateful for any excuse to leave her crumbling marriage behind in Sydney.
And Carrie, who remained in Clare Valley, is perhaps the most apprehensive. Her marriage–the nominal cause of the sisters’ estrangement–is also on the rocks. Was she wrong to have followed her heart and run off with Bett’s fiancé?

When Lola shares her special request, that the girls stage a musical she has written, their short visit becomes a much longer commitment. As they are forced to spend more time together, the sisters must confront the pain that lingers between them. Preconceptions and misunderstandings are slowly put aside and the three find themselves gradually, irresistibly enveloping one another once again–until an unexpected turn of events changes everything in ways none of them could have ever imagined. . . .

Layering the lighthearted antics of small-town life with a heartbreaking story of loyalty lost and found, The Alphabet Sisters is an unforgettable story of two generations of women who learn that being true to themselves means being true to one another

My review:
A few years ago I read Upside Down Inside Out by this author. It was ok, as far as a romance novel goes, but I wasn't overly impressed. Last month Monica McInerney made a stop on her Australian promotional tour of her latest book, Lola's Secret, at my local library and I went with a friend who was a big fan of hers, to hear her speak. I was impressed. Very impressed.

Monica is a fabulous and very entertaining speaker. Charming, witty, and humorous.

The Alphabet Sisters is a warm, sometimes humorous, often touching story of sibling rivalry, families, insecurity, love, and loss. For me it felt similar to a Rosamunde Pilcher story, but set in Australia and a little bit more up to date. Not quite as warm and fuzzy maybe, but every bit as touching and if you have siblings, very relevant.

I truly enjoyed The Alphabet Sisters and will shortly read Lola's Secret.

What are some of your favorite contemporary fiction novels about family? 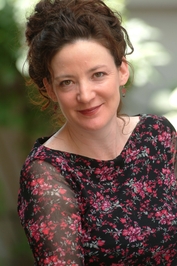 Monica McInerney is the internationally bestselling author of seven novels including Upside Down Inside Out, Family Baggage, The Alphabet Sisters and The Faraday Girls (which was named the General Fiction Book of the Year in the 2008 Australian Book Industry Awards.) Her latest novel Greetings from Somewhere Else will be published in the USA in July 2009.

Monica, 44, grew up in a family of seven children in the Clare Valley wine region of South Australia, where her father was the railway stationmaster and her mother worked in the local library. Before becoming a full-time writer she worked in children’s television, tourism festivals, book publishing, arts marketing, the music industry and as a waitress, a hotel cleaner, a Kindergym instructor and a temp. For the past eighteen years she and her Irish husband have been moving back and forth between Australia and Ireland. They currently live in Dublin.

Visit her website at www.monicamcinerney.com
Posted by A.B. Shepherd at 10:55 AM