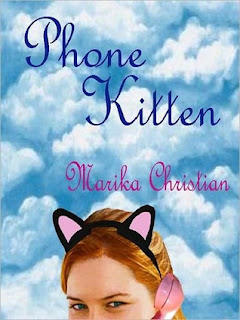 Shy, slightly overweight Emily would die if she had to talk dirty face-to-face-especially to her hot cop boy friend. She sure didn't set out to do phone sex-she wanted to be a writer. But when her BFF framed her for plagiarism, she got in a tiny financial hole and saw this ad for "phone actresses" . . . Hey, it's not nearly as bad as it sounds.
No pantyhose or pantsuits, no regular hours, you're your own boss, and lots of people to talk to. Guys, that is. But here's the odd thing-lots of them want to talk about more than Emily's imagined attributes; they start to think of her as the best friend they'll never have to meet. Next thing you know, one of her customers gets killed and Emily knows a lot more about it than she should. But she can't tell the nearest cop, who's also her own true love, because then he'll find out about her secret life. What's a phone kitten to do? Solve the murder herself, of course-because wouldn't it be a great story for the newspaper that wrongly fired her? It's her ticket back to her real life-if it doesn't get her killed.


Phone Kitten is your ticket to hours of giggles-so long as you're not looking for raunch. Because this is so not it. Somehow, first-time author Christian manages to handle a potentially smokin' subject with such sly wit, authentic detail, and clever writing that you'll wonder why this subject was ever considered taboo.

My review:
First book I've ever read where the heroine is a phone sex operator! A little too much emphasis may have been placed on Emily's chub insecurities in this novel, but I do understand that this was supposed to be the "hook" here. That bit just got a little bit old for me after awhile.

For being about phone sex, this book is remarkably clean and refreshingly so. This is a really cute story and a different concept. It did take awhile for the story to get hopping but once it got there it was fun. I liked Emily, and her friends Dennis and Craig - especially Craig. Who doesn't want a friend like Craig?

I liked that Emily turned out to be pretty tough, in spite of her insecurities. And I liked the happy ending.

This book won't change your world, but it was cute and it was a fun mystery in which I didn't see the bad guy coming. Four stars.

About the author:
Marika Christian lives with her best friend Dash, a Jack Russell Terrier, in New Orleans. When she's not marveling at the beauty of her adopted city, she can be found hanging out with the other dog girls in the park, mooning over Johnny Depp, organizing her iTunes library, cross stitching, and searching the Internet for arcane and useless knowledge. She'll do anything to avoid actual writing.