The Prophet Motive by Eric Christopherson 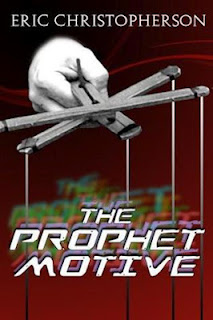 Book Blurb:
San Francisco Homicide detective John Richetti spent part of his childhood living inside an infamous cult known as the People's Temple. As a boy he'd lost his parents to cult-instigated mass suicide. The memories come flooding back when he investigates the bizarre suicide of a former member of Earthbound, a New Age cult--and suspects murder instead. To uncover the truth he infiltrates the group, along with police psychologist Marilyn Michaelsen.

The new recruits find themselves pushed to their physical and mental limits by a series of sophisticated brainwashing techniques as well as by a cult leader, known only as The Wizard, who appears to possess psychic and paranormal powers.
Even the psychologist's expert knowledge of cults can't explain The Wizard's feats, and it isn't long before John, like his parents before him, surrenders his independence to another . . .

My review:
I was intrigued by the "inside a cult" aspect of this book. The author gives a very realistic depiction of what a child might have endured at Jonestown as well as the brainwashing techniques that a cult leader might use to influence his followers into doing things his (or her) way.

But at the heart of this book is a truly evil villain - a megalomaniac who also happens to be a brilliant and narcissistic psychopath who is experimenting with the human brain. If the kind of experiments Christopherson describes in this book could be real (and it is quite believable) then the world just might be a very scary place.

The book is a little bit graphic in two places but not so much that an adult reader should find it offensive. The graphic bits are in keeping with the story. This is a solid thriller and it gets a solid four stars from me.

Have YOU ever wondered what really goes on in a cult? 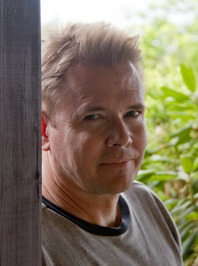 About the author:
Eric is a former police officer and federal government consultant. His undergraduate degree is from the University of Texas at Tyler, and he has a graduate degree from Duke University. He is represented by Frank Weimann of the Literary Group International in New York City.

He was born in California, grew up in New England, and has since lived throughout the United States and a bit in Asia. He now lives in semi-rural Ohio with his wife, Seiko, and an infant son, Keith.
You can catch up with Eric on Twitter under the handle @SuspenseMan.
Posted by A.B. Shepherd at 11:47 AM