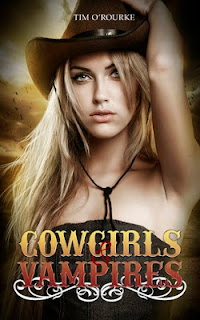 Book Blurb:
Samantha Carter believes that a vampire is responsible for the brutal deaths of four women in her hometown.

Desperate to prove this, Samantha accepts the friendship of a Preacher, two Cowgirls, and a Cowboy. Together, they are hired by the mysterious Englishman, Spencer Drake, to travel by steam train into the mountains in search of gold. It’s on this journey that Samantha finds romance with a man who keeps a dark and terrifying secret and discovers that vampires are not only very real, but are far more dangerous than she ever imagined. In order to stay alive, Samantha needs to figure out why things have gone so terribly wrong for her. But more importantly, why is she out of time?

**This is a mature New Adult Novel for ages 17 and up. Contains sexual situations and scenes of horror.**

My review:
Just in time for Halloween! While I am not a fan of this book's cover - a little to sexualized for my taste - I don't judge a book by it's cover.

This book is a little more gruesome than I generally prefer in some parts, but I can overlook that because - hey - it is after all a vampire book and a certain level of gruesomeness is expected. Due to the excessive amount of vampires books that have come out in the past couple of years since the whole Twilight and Sookie Stackhouse phenomenons I've been pretty much avoiding vampire or werewolf novels, but this one intrigued me by adding cowgirls so I decided - why the heck not?

This was a really great book! Samantha is amateurishly chasing a Jack the Ripper copycat because she is sure it is a vampire and she wants to prove vampires do exist. It starts in 2012 London and the next thing you know Sammy wakes up in the old west. So it contains one of my favorite elements right off the bat. Time travel!

And it contains a ton of mystery, suspense, distrust and an awesome plot. I don't want to give too much detail because I would hate to spoil this book for you. Just trust me - it was great. And I look forward to the second book in the series. I'm rating this one FIVE stars.

Are you over the whole vampire/werewolf thing? Or do you get a thrill from vampire novels? If you've read this one and would like to discuss it, feel free to email me at bluegirl1961@hotmail.com. 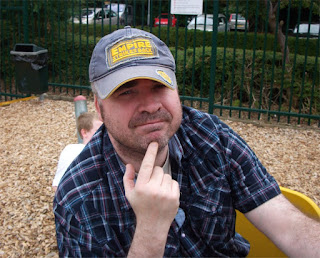 Working away in the dead of night, Tim has written many short stories, plays and novels. Tim is the author of the bestselling 'Kiera Hudson series', the two paranormal romance books entitled 'Black Hill Farm' and the 'Doorways' Trilogy.

The world publishing and movie rights to Tim's latest novel 'Flashes' have just been signed by Chicken House.

Tim is currently working on his new series 'Cowgirls & Vampires'. The first book is now available.

Don't be shy, feel free to contact Tim at Ravenwoodgreys@aol.com. Tim would love to hear from you.
Posted by A.B. Shepherd at 12:16 PM