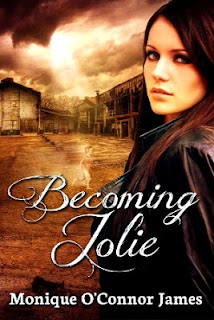 Book Blurb:
Jolie Bourque is trying to finish her thesis and get on with her life. She wanders into Folette, Louisiana, a place plagued by ghost sightings, convinced the residents are all crazy. No one wants to help her, no one except, Hutch Landry and his brother, Tucker.

Will she find the monster that is preying on the town's children? Can she stay sane surrounded by madness? What are her ties to the small town? How will she choose between the brothers?

This is the nightmare that is her life and all just a part of Becoming Jolie.

My review:
There are some really great things about this book. It has a twisty-turny plot which keeps your interest. It has emotion. It has some interesting characters.

But there were a few little things I didn't enjoy. It was well written for the most part, but I felt like if it had an editor the editor fell asleep a couple of times and missed a few things. This paragraph is an example:

Jolie pushed away from Hutch and took a deep breath. Hutch watched her as she carefully searching for the signs; she was about to go off the deep end, but she didn't crack. Instead she said, "I'm sorry. I just saw her, and then I thought we hit her. Why can't they go home?"

I think you can see my point.

Additionally, ****SPOILER ALERT*** there is a plot twist wherein Jolie falls for one of the other characters who has a past including drug use and animal cruelty for which he apparently never received any kind of treatment - he just grew out of it? And she just accepts that he is no longer that person. I'm still scratching my head over that one.

But overall a really creative story, although a few things are never quite explained. I enjoyed this one a lot.

About the author:
Monique is the mother of two beautiful children and lives in a small community outside of Baton Rouge, Louisiana. She currently works full time as an insurance agent, but her favorite jobs are mother, wife, and author. On her eighth birthday, her mother bought her a journal and said "write whatever you want, just write." And so, a love affair with words was born. She wrote poetry and short stories in high school and college, until 1993 when her mother was diagnosed with breast cancer. After her mother's death in 1998, Monique fell into a deep depression and found herself unable to write. Nine years passed, and only on rare occasion did she attempt to write with no luck. Finally, in 2007, under the urging of friends, she sat down and pecked out her first novel. It was raw and unpolished, but the process had been unquestionably cathartic. The next three years were spent filling her hard drive with seven complete manuscripts. At the beginning of 2011, Monique decided it was time to edit the work and share it with the world. She hopes you enjoy the ramblings of a deeply southern girl raised in a state rich with heritage and love.

You can learn more about Monique on her website.
Posted by A.B. Shepherd at 1:03 PM