Book Blurb:
For pathologist and forensic physician Dr Anya Crichton, the death of a gang rape victim hours before she is due to give evidence at trial is a double tragedy. The violent Harbourn brothers, the girl’s accused attackers, now look like they will escape prosecution. But the Harbourns’ trail of destruction doesn’t end there. When two sisters are brutally assaulted and one of them is killed, Anya begins working round the clock to catch the Harbourns and nail their ringleader, the deviously clever Gary. With the help of Detective Kate Farrer and the surprise involvement of star litigator Dan Brody, she begins to discover just how twisted this family really is, and what they’re capable of. In Dr Anya Crichton’s most difficult case yet, she must piece together the evidence before a killer’s attention is turned on her…

My review:
Kathryn Fox is an Australian author who has been likened to Patricia Cornwell and has been highly praised by James Patterson and other similar authors. She will be making a visit locally this week to promote her latest book and I plan to attend, so I wanted to read at least one of her books prior to hearing her speak.

This is the story of a forensic physician who is heavily involved in the criminal justice system. As such she is constantly involved with different criminal cases. This story was light on the development of the central character, but that may be because this is book four of a series and I have not read the previous books in this series. I'm sure her character is probably well developed in the previous books in the series.

It does stand alone as far as the cases go, but I didn't feel like I got to know Anya as well as I would have liked. It is gruesome in parts and quite heavily centered on violence against women. Great plot and twists though. A thoroughly enjoyable, if dark, crime novel. 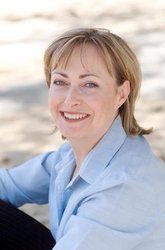 Kathryn Fox is a medical practitioner with a special interest in forensic medicine who currently lives in Sydney, Australia.
She has worked as a freelance medical journalist and written regularly for publications including Australian Doctor, The Sun Herald and CLEO magazine.

It also toppled The Da Vinci Code to become the no. 1 crime book on Amazon in the UK and Germany.

You can learn more about Kathryn and her novels by checking out her website here.
Posted by A.B. Shepherd at 11:38 AM