The Reading Room by Ruth Hamilton 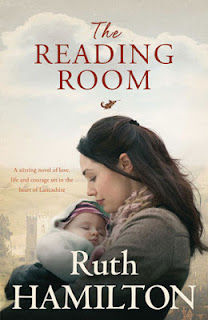 Book Blurb:
Leanne Chalmers has made a career for herself presenting her own style of home decorating and design on the nation's screens. That was her past life, at least. For now Leanne has been forced to start again as Lily, leaving her name, job, and marriage behind. No one in the Lancashire village of Eagleton has a clue about Lily, save that she's come up from the South West with her best friend and a small child. But it’s hard to lead a solitary existence in a small place, and Lily and Babs are swiftly embraced by some of the local characters: Mike, the Catholic priest, who the girls can't help noticing is easy on the eye; Eve, a Liverpudlian, who has a big mouth but a heart of gold; the
hairdressers Paul and Maurice; and Dave and his love, Philly, both shy yet determined not to be cowed by Dave’s mother, the domineering matriarch of the village. Soon, Lily's new life is full of promise and as she joins Dave's reading room, a shop come café and library, she begins to relax. But then Eve is wounded in a burglary, and suddenly, Lily is afraid that her secret is out: her husband Clive may have discovered where she is, and, having left her for dead before, is now out to kill her.

My review:
This book was called trite by another reader. I disagree. I think of it more as traditional. It is written in a style somewhat similar to that used by one of my favorite feel-good authors, Rosamunde Pilcher. Although is a contemporary novel and it was released in 2009 it has a feeling of being a bit old fashioned. The characters are well defined, the plot pulls you along, and the ending is satisfying if a bit predictable. But in my book predictable isn't necessarily a bad thing. Sometimes I like knowing that the ending will be a happy one before I begin a book.

In a world as uncertain as the one we live in, with so many horrible things happening every day, isn't it nice to sometimes have a happy ending? It is for me. Not as a steady diet - that would be just to sappy. But as an occasional treat?

In The Reading Room you feel like you get to know all the people in the village quite well. It is a village I think most of us would love to live in, where people care about their neighbors and are welcomed with open arms. Ruth Hamilton's characters are mostly good-hearted. There is a clear delineation between good and evil here. This isn't a novel that will knock your socks off. Instead it is like warm fuzzy socks on a cold winter's day. Comfortable and cozy.

One of my favorite things about this book though, is "melegs". That bit made me laugh out loud. What is "melegs"? I'm not telling. See? Now you have to read it just to find out what "melegs" is. ;)

Now tell me readers, do you like to occasionally read a traditional, predictable novel?

About the author:
Ruth Hamilton was born in Bolton and has spent most of her life in Lancashire. She is a well-known writer in the north-west of England. Being the bestselling author of nineteen novels, Ruth Hamilton now lives in Liverpool.  You can get more information about Ruth Hamilton at her website.
Posted by A.B. Shepherd at 11:48 AM