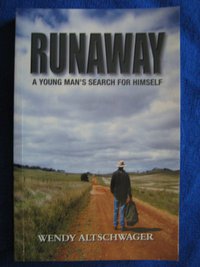 Book Blurb:
Abandoned as a tiny baby, Robbie, a young teenager is desperately seeking his birth parents. He is extremely naive, lacks self esteem and social skills and is down-trodden by his peers.

Robbie is emotionally shattered, realising his dream of being a real family will never be, given the truth of his parents situation. In his quest he learns new skills and experiences country life.

He meets Jake while working on a sheep station in New South Wales and the two become best mates.
As cocky 19 year olds the larrikins find themselves in all sorts of situations as they discover B&S Balls, bush races, girls and grog!


Robbie takes up bull riding on the rodeo circuit and it is here he meets Magdeline Thornton. A dangerous liaison: her father, a very powerful man, has no time for rough-riders.

Robbie's life is changed in a way he could never, ever have imagined.

My review:
I read this book because this author used to live not too far from me and she did an author's night at our local library. My friend Jane bought the author's two books and she has now loaned them to me. When Jane read them she said to me "Remember at the author night when Wendy said that she was never much of a reader? Well it shows in her books."

I was curious to read this, partly because I wanted to see if I agreed with Jane. I may or may not go on to read the sequel. I'm undecided at this point even though it is currently sitting on my end table.

This book is written in a third person omniscient point of view, which in itself is not bad. But it feels like it is written for a pre-teen or middle school reading level - EXCEPT the subject matter is sometimes mature. The writing style has me scratching my head a bit. When I started reading it, it felt like I was reading a "chapter book" to my kids. That's just the feeling I got from it. But this book is not a children's book or even a YA book.

If you're looking for Aussie culture you'll find it here. Wendy has managed to capture the feel of rural Australian life. But that is the best thing I can say about it.

The storyline is a bit bland for the most part. It alternates between glossing over how this young boy grows up to being a man (we are told he matures, we don't actually see it and it is not demonstrated), to giving you in-depth lessons on marking cattle. Sometimes it is so detailed and yet other times it is so very very lacking in depth. The book also has a sort of bizarre Cinderella-type ending.

I'm just so "meh" about the whole thing. I'm torn. Part of me really wants to cut this author some slack because she is from this rural area and there aren't many published authors from around here so it is quite an achievement on her part and I AM proud that someone from this region has "made it". I'm all about supporting local talent. But part of me also feels it wouldn't be fair to hold her to a lower standard.

Runaway is not an especially long book. Only took me about 4 or 5 hours too read. But it is fairly rare. It has only been published in a small quantity and is not for sale in book stores. I'm tempted to read it's sequel, Edwina Downs, just because it's not widely available. And it is sitting on my end table. Or maybe to give Wendy a second chance. Sometimes an author deserves a second chance. What do you think? If you were me would you read the sequel?

About the author:
Wendy Altschwager grew up in the South East of South Australia and married a local boy from Millicent.  Like many authors, Wendy has based her storyline around places familiar to her. Hamilton and Horsham feature prominently in this book as Robbie traces his long lost family through the local shearing team. Runaway is her first novel with the planned sequel, Edwina Downs due for release in 2012.