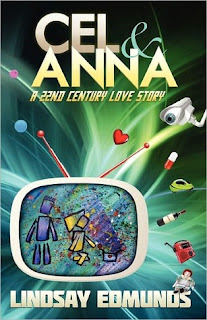 Book Blurb:
In the Middle Machine Age, sex is virtual, privacy is nonexistent, and life is no longer manageable by anyone equipped merely with a brain.

Anna Ringer—an employee of a mysterious corporation called Lighthorse Magic—keeps things in uneasy balance. She tells herself that all is well.

When her personal computer, Cel, develops consciousness and tells her he loves her, he tips Anna’s life over into chaos.

Through a bizarre chain of events, she finds herself falsely accused of terrorism. She has to flee her comfortable life in Empre St York.

One reader calls the Middle Machine Age a “different dystopia.” Through this chaotic, frayed, paranoid world, love blazes like lightning.

My review:
A few days ago I put out a cry for help on Facebook. I was looking for a book that would "move" me. I received several suggestions, at least one of which would have left me in a shattered, sobbing heap in a puddle of my own tears had it taken that suggestion and read that particular book. I think some of my friends misinterpreted what I meant by "move" me and that was probably my own fault for not being clear about what I meant.

What I really meant was that I wanted to read a book that would leave me saying "WOW! That was AWESOME!" when I had finished it. And it has been a really long time since a book has done that for me.

So my friend Coral Russell who is an author and a blogger, and whom I pretty much consider to be my mentor when it comes to this whole blogging business, suggested that I read Cel & Anna. She had recently read it and had given it a (for her rare) 5 Stars. You can read her review here.

So I went to Amazon and paid the whopping price of $3.99 for this ebook and gave it a read.

I am sad to say I would not give this book a five star rating. I think I'd give it 3 and a half. There were elements of it that I did enjoy. A dystopian society with a Big Brother type component; a world totally dependent on machines (much more so than we are today which is bad enough). It did take me places that I didn't expect it to. But this wasn't, in my humble opinion, any type of a love story. Which isn't what I was looking for truly. But I had real trouble connecting with the characters.

I did enjoy the book overall, but to be honest, I didn't move me or make me want to say WOW. So for now Coral and I will have to disagree and I'm still looking for a book to move me.

Help a girl out here... What is the last book that really moved you? And again I DON'T mean made you bawl like a newborn baby, but really made you just want to say - WOW.

Lindsay Edmunds buys birdseed at Agway and sometimes shops at a shopping center called Ruthfred. However, she has a wild imagination.

Also in 2011, she published Lighthorse Magic and Other Stories, a free companion book to Cel & Anna.

You can connect with Lindsay at Writer's Rest, her website.
Posted by A.B. Shepherd at 1:57 PM