As my last entry in the Blogging A-Z Challenge (in association with the other bloggers of Book Bloggers' Collaborative) what better choice than V is for Vengeance by Sue Grafton - the Queen of the alphabet challenge herself! 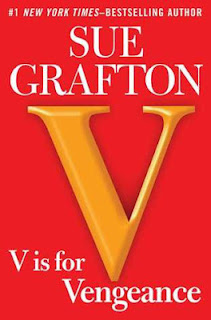 Book Blurb:
A spiderweb of dangerous relationships lies at the heart of V is for Vengeance, Sue Grafton's daring new Kinsey Millhone novel.

A woman with a murky past who kills herself-or was it murder? A spoiled kid awash in gambling debt who thinks he can beat the system.

A lovely woman whose life is about to splinter into a thousand fragments. A professional shoplifting ring working for the Mob, racking up millions from stolen goods. A wandering husband, rich and ruthless.


A dirty cop so entrenched on the force he is immune to exposure. A sinister gangster, conscienceless and brutal. A lonely widower mourning the death of his lover, desperate for answers, which may be worse than the pain of his loss. A private detective, Kinsey Millhone, whose thirty-eighth-birthday gift is a punch in the face that leaves her with two black eyes and a busted nose.

And an elegant and powerful businessman whose dealings are definitely outside the law: the magus at the center of the web.


My review:
This is my first experience with one of Sue Grafton's alphabet series. I'm a big fan of the crime genre as a whole. I'll admit up front that I love a good book with a kick-ass female protagonist. So Kinsey Millhone is right up my alley as far as that goes, as a former cop and tough PI.  I really like her character.


She's supported by a great cast of characters as well, including her elderly former baker neighbor, his brother and sister-in-law who run a pub and can't cook anything appetizing (I'm guessing these are recurring characters in the series), a former jockey turned burglar and his formerly chunky bride turned slim-downed make-up representative, a big bad gangster who doesn't like to kill and his madman killer brother. The cast list goes on and on.


This is a very complex, detailed crime novel packed with action and clues and unexpected romance. I can't say too much more for fear of spoiling the story, which I really want to do, but I'll force myself to hold off.

I can certainly see why Sue Grafton is so highly regarded in her field of writing. She is an excellent story teller.


I give this a big thumbs up! 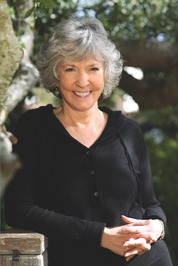 Sue Grafton is published in 28 countries and 26 languages—including Estonian, Bulgarian, and Indonesian. She's an international bestseller with a readership in the millions. She's a writer who believes in the form that she has chosen to mine: "The mystery novel offers a world in which justice is served. Maybe not in a court of law," she has said, "but people do get their just desserts." And like Raymond Chandler and Ross Macdonald, Robert Parker and the John D. MacDonald—the best of her breed—she has earned new respect for that form. Her readers appreciate her buoyant style, her eye for detail, her deft hand with character, her acute social observances, and her abundant storytelling talents.

But who is the real Sue Grafton? Many of her readers think she is simply a version of her character and alter ego Kinsey Millhone. Here are Kinsey's own words in the early pages of N Is for Noose:

"So there I was barreling down the highway in search of employment and not at all fussy about what kind of work I'd take. I wanted distraction. I wanted some money, escape, anything to keep my mind off the subject of Robert Deitz. I'm not good at good-byes. I've suffered way too many in my day and I don't like the sensation. On the other hand, I'm not that good at relationships. Get close to someone and the next thing you know, you've given them the power to wound, betray, irritate, abandon you, or bore you senseless. My general policy is to keep my distance, thus avoiding a lot of unruly emotion. In psychiatric circles, there are names for people like me."

Those are sentiments that hit home for Grafton's readers. And she has said that Kinsey is herself, only younger, smarter, and thinner. But are they an apt description of Kinsey's creator? Well, she's been married to Steve Humphrey for more than twenty years. She has three kids and four grandkids. She loves cats, gardens, and good cuisine—not quite the nature-hating, fast-food loving Millhone. So: readers and reviewers beware. Never assume the author is the character in the book. Sue, who has a home in Montecito, California ("Santa Theresa") and another in Louisville, the city in which she was born and raised, is only in her imagination Kinsey Millhone—but what a splendid imagination it is.

You can connect with Sue by visiting her website.