Tell A Thousand Lies by Rasana Atreya
My rating: 4 of 5 Stars

Tell A Thousand Lies was shortlisted for the 2012 Tibor Jones South Asia prize!

Book Blurb:
In a land where skin colour can determine one's destiny, fraternal twins Pullamma and Lata are about to embark on a journey that will tear their lives apart.

Dark skinned Pullamma dreams of being a wife. With three girls in her family, the sixteen year old is aware there isn't enough dowry to secure suitable husbands for them all. But a girl can hope. She's well versed in cooking, pickle making, cow washing - you name it. She's also obliged her old-fashioned grandmother by not doing well in school.


Fair skinned and pretty, her twin sister Lata would rather study medicine than get married. Unable to grasp the depth of Lata's desire, the twins' Grandmother formalizes a wedding alliance for the girl. Distraught, Lata rebels, with devastating consequences.

As Pullamma helps ready the house for her older sister Malli's bride viewing, she prays for a positive outcome to the event. What happens next is so inconceivable that it will shape Pullamma's future in ways she couldn't have forseen.


My review:
Pullamma is the central character in this novel set in 1980s India. She and her two sisters have been raised by their Grandmother in a small Indian village. The story begins when Pullamma's older sister is having her bride viewing. Enter a powerful and ambitious politician who is as corrupt as they come. His machinations throw the lives of Pullamma and her family into turmoil that lasts for nearly a decade, and the repercussions of which will never end.

I admit to being fairly ignorant of Indian culture, and especially that in the villages, although I am aware that even today arranged marriages are very common. The Indian women in this novel have almost no control over their own lives. Even many of the men seem to have little control. Superstition is rampant, and politicians have far too much power.

What happens to Pullamma in so unbelievable, yet believable at the same time. You will become frustrated and feel impotent and at times when I put myself in her shoes I think I may have committed murder. I can tell you I thought about that a lot while reading this novel.

It is moving, thought-provoking, and heat-breaking, but the conclusion is satisfying. 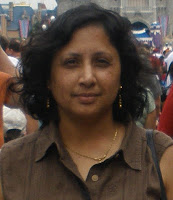 About the author:
Rasana Atraya left a comfortable job in IT because she thought roughing it out as a penniless writer was romantic. She's a blogger, and the mother of two grade schoolers who've been begging for the chance to design the cover of her ebook. Maybe next time kids!

If you'd like to get your own copy of Tell A Thousand Lies you can get it at Amazon US or Amazon UK.