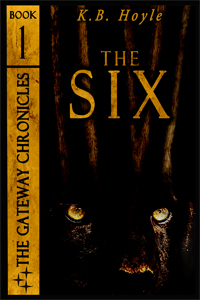 Remember when I wrote that post last week? You know, the rant about cliff-hanging book series? Is your serial satisfying? A reader's rant. Well THIS is the book that I was telling you actually does it right! I love this book!

Book Blurb:
Darcy Pennington hates her life. She is an insufferably average teenager with no real friends, crushing social anxiety, and an indescribable sense of not fitting in anywhere. A change in her dad’s job forces her to attend Cedar Cove Family Camp the summer before her eighth-grade year, and Darcy once again finds herself on the outside of a social circle of teenagers, with her only advocate being an awkward girl named
Samantha Palm. The only problem is, Darcy has no desire to be friends with her, but as the hostility from the other teenagers increases, she decides to return the friendship.

When Darcy begins to experience strange magical occurrences, she comes to believe she’s either losing her mind or on the brink of a discovery that could give her purpose in life. After unwittingly stumbling through a magical gateway to a new world called Alitheia, she convinces
Sam and the other four teenagers to travel there with her, and despite their earlier hostilities toward her, they eventually concede leadership of their small group to Darcy. Once there, they learn the “arrival of the Six” was prophesied hundreds of years before, and that they must expel an ancient evil from the land. In the end their lives, and the fate of Alitheia, will hinge upon Darcy. Will she have what it takes to fulfill her mysterious purpose? Or will she fall prey to a deadly foe?

My review:
This is the best darn YA novel I've read in a very long time. It is the first in a series, and I'll tell you one thing. K.B. Hoyle has gotten it right. It is a fantasy novel along the lines of Narnia or the Harry Potter Series, but in my humble opinion it is better than both of those. Why?

Because Darcy Pennington, the primary character, is flawed. She's not some perfect princess type character who always makes the right decision. She makes mistakes. A lot. And she is a typical teenaged girl. She's socially awkward, she's self-absorbed and selfish, she's jealous, she's petulant, she's rebellious, and best of all she is relatable. In many of her attitudes and thought-processes she reminded me of myself as a teenager and I loved that!

The other five primary characters we don't get to know quite as well in this book, because it is written from Darcy's perspective, and I hope that as the series goes on we do get to learn more about the others.

The other thing K.B. got right is the ending of this one. You have a satisfying ending, yet there is obviously more to come and you can't wait to read it!

The story begins when Darcy is dragged from her home in Chicago to a camp in Michigan's Upper Peninsula for a week long vacation with her family. She doesn't want to go, and certainly doesn't want to spend time with her neighbor Samantha and Samantha's best friend Lewis because they aren't cool enough to hang out with, even though Sam wants to be her best friend. Then at the camp Darcy meets Perry, Dean and Amelia who are friends with Sam and Lewis. When Darcy offends Sam the others don't want anything to do with her either.

But Darcy finds a hidden doorway to another world - a magical world - and discovers that the six of them are destined for greater things. She doesn't magically turn into a heroine. She's still a flawed teenager.

And I don't want to spoil the book for you so you'll just have to read it to learn more.

If you don't read this novel you are really missing out.

Question for you readers - what real life location would you like to see as the setting for an adventure novel?

K. B. Hoyle is a wife to a wonderful husband, a mother to two rambunctious little boys, an expectant mother to baby number three, and has been a classical educator for five years. She always knew from a young age that she wanted to write stories that would inspire people. Her favorite genre to read and write is Young Adult Fantasy and Science Fiction, so that is where her journey began. K. B. Hoyle began writing her first fantasy novel at the age of eleven, which proved to be valuable experience and practice for the novels she would publish as an adult.

Where can you get The Six? The Writer's Coffee Shop.