Excerpt and Giveaway of Incognito by Miho Li

Ok readers this is something a little bit different. As part of Full Moon Bites blog tour I am presenting to you something which is a new genre for me. Contemporary Male/Male Erotica. Check it out. You can enter to win an ebook copy of Incognito by Miho Li just by leaving your email address in a comment on this post. 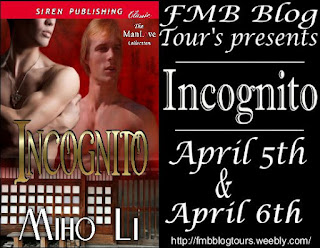 Book Blurb:
"When Ren sees the new transfer student—Shin, black hair, storm-cloud-gray eyes, and more beautiful than any guy had a right to be—he makes it his mission to get to know him. Too bad Shin is about as sociable as fungus, and about as likable, too. But Ren isn't good at giving up, so he takes on the challenge of cracking Shin's titanium shell. What he finds underneath, though, is way more than he's prepared to handle.

People are disappearing in Akita, and Shin might be behind it. As Ren's feelings grow for the reserved man, so do the number of missing person reports, and Ren doesn't know if their budding relationship is enough to withstand both the well of secrets and the organization Shin works for."

Excerpt:
There was a heavy sigh and then, “Ren, just go talk to him already.”
Ren’s gaze snapped back to his friends. He flicked shaggy blond hair out of his eye and said, “What?”
“Shin,” Hideyoshi said, making vague hand gestures at the student Ren had been ogling.

Shin had settled in the grass beside a tree and was propping a book open in his lap. Messy strands of black hair fell across his pale cheeks, and he brushed it back with fingers that were surprisingly elegant for a guy.
“Go talk to him.” 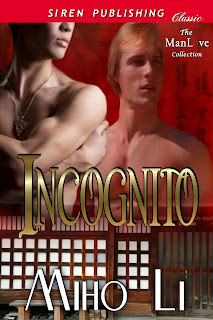 Shin Sarutobi was a newly transferred junior, and despite sharing several classes, Ren had yet to find the right opportunity to talk to him. Not because he was intimidated but because Shin treated everyone around him, professors and students alike, with what barely qualified as cool indifference. He spoke in class when necessary but otherwise remained removed from everyone else and, from what Ren could tell, preferred it that way.

The exception was Kyouya Tsutano. Kyouya had transferred in about a month before Shin. It had been a big deal, what with his
family being corporate millionaires. Rumor had it Kyouya’s dad died recently, and he had returned to Akita to live with his uncle.

From the start, Kyouya and Shin had a volatile relationship—they always looked pissed just being near each other. Except Ren had overheard them arrange meetings, and Kyouya remained the only person to date Shin spoke with on a regular basis.

Naturally, Ren assumed they were sleeping together. He entertained the theory that Shin and Kyouya were trapped in an unhealthy relationship based on angry but mind-blowing sex.
He chose not to share this theory with his friends.

In any case, the fact remained that Shin was a jerk. A gorgeous jerk with ink-black hair, intense gray eyes, and long legs that made him one of the few students taller than Ren, but a jerk nonetheless. Ren watched as a line formed between Shin’s brows, and he glanced in the direction Kyouya had gone with a sour twist of his lips.

Shin was also a jerk in dire need of an intervention.
Ren nodded decisively. “I’m going to talk to him.”
Hideyoshi gave him a flat look before apparently deciding against voicing what he was thinking. Ren ignored him and crossed the lawn with purposeful strides toward Shin.
With blond hair and blue eyes thanks to his European half, Ren wasn’t used to making the first move. Shin, however, was definitely worth the exception.
“Hi,” Ren said. He didn’t believe in pick-up lines.
Shin didn’t acknowledge the greeting.
Ren cleared his throat, undeterred. “Your friend looked pissed.”
Shin’s gaze lifted, passing dismissively over Ren’s smiling face before returning to his book.
“Uh...your boyfriend?” Ren said, hedging for a response.

Without lowering his book, Shin turned his head and looked up at Ren with ill-concealed impatience. “Did you want something?”

Ren considered this. “Should I answer that honestly?” Because there were a great many things that Ren wanted, including but not limited to Shin spread out on his bed in nothing but a silk ribbon.
Maybe it was best not to be quite so forthcoming yet.

About the Author:
Miho grew up on horror, fantasy, and romance novels (although she hid the romance novels, considering she probably shouldn't have been reading them at eleven years old). She started writing horror first, but these days, her work features more boys kissing boys than heads exploding, which everyone agrees is an improvement. She has a love of all things fantastical, and her favorite romances are the ones that don't happen easily. Reading or writing about characters overcoming adversity in order to reach their happy endings, whether that's together or not, is what fuels her love of the written word.

Want to connect with Miho? You can find her at her blog and on Twitter.

This tour was put together by FMB Blog Tour’s.

Readers how do you feel about M/M romance as a genre? Do you enjoy it? Share your experiences with me.
Posted by A.B. Shepherd at 10:46 AM