On March 21st I will be posting my review of William Knight's book Generation as a partcipant in his Blog Tour through Novel Publicity. Feel free to click on the Generation book cover on the right side bar for more information about this fabulous book, for purchasing information, AND TO VOTE FOR MY BLOG! :)

But in the meantime William was kind enough to answer some questions I had for him after I read this AWESOME and thought provoking book! 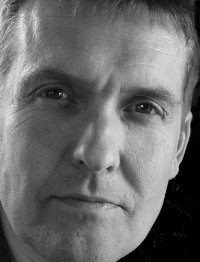 1. What has inspired your interest in Genetic Modification?
My school physics teacher, Mr Pope -- a tall, serious man with the occasional mischievous glint in his eye -- taught me how to ask the time in Irish Gaelic and instilled a love of reading science articles-- in particular the New Scientist. Some issues I don't understand a word, then in others I voraciously read each story dreaming up plots. GM or genetic modification, is a natural technology for a thriller writer... soooo many possibilities of dark creatures and evil science.

2. Do you have a scientific background or did you need to do copious amounts of scientific research to write Generation?
I did a lot of research to get the details right, but I've always been interested in science. That interest fueled the story line, and I used targeted research to fill in any gaps. It also helps that my wife is a GP, so I had a lot of medical advise for free.

3. Generation focuses on genetic experimentation gone wrong in a horrific way. Do you believe anything like this could happen in reality?
Not quite in the same way as the book, perhaps, but certainly I think GM is something that will eventually come back to bite us. The ecosystem is finely balanced and we mess with it at our peril. Every few weeks another groups of scientists discovers a unique way animals share and transfer genes between themselves, if we engineer genes and put them in the wild, they will cross the species barrier. As the line in Jurassic Park goes, "Life will find a way."

4. Hendrix Harrison is a former war veteran who is afraid of technology, especially mobile phones. A phobia brought on by his war experiences. Are you a war veteran or are his experiences purely figments of your imagination?
I am lucky enough to work with and ex-US marine, a former British Army officer and an ex-squaddie. All of them have served in Afghanistan and in return for getting them drunk they regaled me with horrific stories of life on the front line -- and in the barracks, I might add. I don't understand why more ex-service personnel are not deeply traumatized by thier experiences, and I suspect a lot of it is swept under the carpet.

5. How did you come up with his phobia?
I have to admit to have borrowed from my own life here. I'm suspicious of technology, am certainly not an early adopter and sometimes wonder why we need to build such wonderful contraptions (and I admit they are mostly wonderful). I suspect we have replaced a lot of low-paid clerks with a lot of highly-paid computer people. I exaggerated the phobia for Hendrix of course, but there are plenty of people out there who let hi-tech pass them by either by ignoring it or being unable to understand what is required of them.

6. This novel has been described as crime/horror. Is that also your favorite genre to read or do you prefer something along less sinister lines?
I like 'dark' I suppose, but actually have quite a difficult time finding it, and read a variety of crime-thrillers, literary fiction and non-fiction. As a teenager I spent a great deal of time reading horror from King, Herbert even Dennis Wheatly!  But this was interspersed with a lot of science fiction. My favourites being Azimov and Iain M Banks. The last crime thriller I read was the excellent Plugged, by Eoin Coiffer.

7. Who are your favorite authors and how have they inspired you?
Writing is a craft that requires study -- at least for me. I like Dan Brown for the tension he creates at the end of each chapter, and I loved Steig Larsson's Millenium trilogy for its relaxed atmospheric pace and intricate plot (perhaps a little too relaxed at times!) But I think my all time favourite author is John Wyndam and I still dip into his works from time to time just to reminisce and enjoy the imaginitive story lines. (I think the style is a little dated now, however).

8. What can we expect to see in your next novel?
I have a good first draft of the next novel, Foretold. It's a psychological thriller based on the simple and ancient plot devices of jealousy and revenge. The manuscript still holds a lot of work for me, and I'm not entirely happy with the horror. There is a supernatural element to this one which has to be believable, yet powerful enough to influence the characters. I don't want you to suspend belief, I want you to think it could really  happen!

9. Is there anything else you would like your readers to know?
Please often ask me how long it took to write and I can safely say I spent a lot of time staring out of the window and picking my nails. As for the writing, that goes quite quickly:  each draft takes a month (apart from the first which took about 6 weeks) and there were seven drafts. Time is taken up in between thinking about what the next draft might need and deciding which bits of the plot, and which characters, to murder. As for elapsed time, the first draft was written in 2003!

I hope that adds a bit of background interest.

William, thank you for stopping by to share your thoughts with me and my readers today. I really enjoyed your book.

Readers, what do you think? Is genetic modification gone wrong a real fear? Where do you think science is heading?


Get Generation on Amazon or Barnes & Noble – you know you want to!

And please vote for my blog in the traffic-breaker poll for this tour. The blogger with the most votes wins a $50 Amazon gift card. I want that to be me! You can vote in the poll by visiting the official Generation blog tour page and scrolling all the way to the bottom.

Be sure to enter for your chance to win an autographed copy of Generation : ENTER HERE.

William Knight is a British born journalist and technologist currently living and working in Wellington, New Zealand. He's chased a varying career starting in acting, progressing to music, enjoyed a brief flirtation with handbag manufacturing and was eventually wired into technology where he's been since 1989. In 2003 he published his first feature in Computing magazine and has since written about the many successes and failings of high-tech for the Guardian, Financial Times and the BBC among many others publications. He continues to maintain a lively IT consultancy. Connect with William on his website, blog, Facebook, Twitter or GoodReads.
Posted by A.B. Shepherd at 7:00 AM